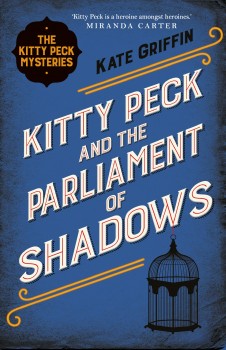 Kitty Peck and the Parliament of Shadows

As Kitty continues her fight against the ‘Barons’ of crime and to dismantle Paradise, her grandmother’s sprawling East End empire, she faces a series of new challenges including a fundamentalist religious sect led by a charismatic preacher.

In this final story in the brilliant Kitty Peck series, Kate Griffin succeeds triumphantly in that hardest of an author’s tasks – maintaining reader interest in a historical series building towards a pre-determined conclusion.

Griffin, Cockney born and bred, a local reporter turned heritage charity press officer, again brings the late Victorian Limehouse spectacularly to life in an evocative and addictive story that builds to a dramatic and spectacular denouement – as glorious a piece of melodrama as you are ever likely to read!

There are differing views about Kitty, who over the series has morphed from teenage seamstress, through a brief, but celebrated career as the Limehouse Linnet, a daring and risqué music hall performer, to Lady Linnet, crime boss and member of the cabal of ‘Barons’ who run organised crime in London and beyond, to a more or less principled reformer trying to shed the dark inheritance of Paradise, her grandmother’s sprawling criminal manor in the shadow of London’s docks.

Some will see her as a feminist heroine. But she reminds me of the Cockney girls I grew up with – smart, spikey, funny, independent, irreverent, fearless, with a practised disdain for the prissy inhabitants of suburbia, that pursed-lips land that started the other side of Hackney Marshes, and like their mothers and grandmothers before them, capable of fighting like hungry lionesses where family and friends come under threat. That generation has gone, dispersed by a well-meaning government in the wake of the Blitz to soulless new towns – and with it the heart and soul of London.

So too has the melting pot that was once Limehouse, where every nationality spewed out from the wharves of the north bank of a filthy River Thames to create a stinking, insanitary slum which Salvation Army founder William Booth classed in his Maps Descriptive of London Poverty as largely: ‘Very poor. Casual. Chronic want’ or even: ‘Lowest class. Vicious. Semi-criminal’.

The gangs – in Kitty’s time the ‘Barons’, establishment figures with their own agendas, controlling an empire of drinkers, opium parlours, prostitution, brothels offering every perversion, smuggling, protection and loan sharking – have gone too, replaced by faceless Eastern European mafia figures living in multi-million riverside penthouses. For them, violence, once a way of life and often an entertainment, is something contracted out at several removes.
Griffin’s writing is fluent and evocative. Victorian London with its sights, sounds and smells has never been better illustrated. The book is original, well and simply written with more attention to character than most crime fiction and some clever referencing to previous plotlines, and rattles along like a Growler cab with plenty of twists and turns.

Her settings bring the action to life and her characters, however small, are all memorable – especially her villains. There are some brutally horrific scenes which may shock, but her ability to portray an overhanging sense of threat and dread makes this, like the earlier books, stand out.

Typical of East End life there’s also plenty of humour. From sheer slapstick to rapier wit, Kitty’s view of the world is served up with irony and perception. Her theatres, in which much of the action takes place, are based on the magnificent Wilton’s Music Hall in Graces Alley, Wapping, which continues to entertain patrons of all classes and tastes as it has since the late 17th century.

To reveal much of a dark plot full of angst, social comment and thrilling action without spoiling is an impossibility. But Kitty’s bid to run Paradise her own way, which has brought her into conflict with the Barons, who will stop at nothing to retain and extend their control, has now reached its climax.

As a new threat appears in the form of an evangelical preacher crusading against the ‘wickedness and vice’ of her music halls, she must continue her battle against the cabal which has already robbed her of so much she held dear and save Paradise from destruction without losing more of the people she loves.

Read it as a standalone, but if you do, be prepared to be dragged in to buying the earlier books! This is a brilliant ending to what has been a brilliant series, putting Griffin in the very top flight of historical crime authors.

Where does she go now? As long as she stays in the East End, I’ll be happy!