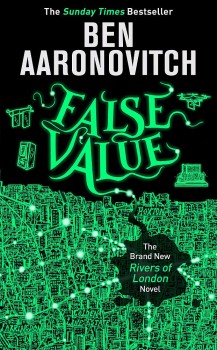 In his first undercover role, Peter Grant infiltrates a London based tech company which is hiding a secret within its Douglas Adams-themed offices.

In the eighth novel in the Rivers of London series, Peter Grant’s already complicated life gets more complex. As if balancing his roles as city copper and magical practitioner wasn’t enough, he’s about to become a parent, along with his better half - Beverley, genius loci of London’s Beverley Brook river. This is probably not the best time for him to be trying something new. Except that he’s now been sent undercover, as a security officer at the headquarters of the tech firm, Serious Cybernetics Corporation.

SCC is hiding something behind its Douglas Adams-themed facade, keeping secrets on the upper floors of its modern offices, and it’s up to Peter to find out what that is, and what is has to do with the theft of a set of musical punch cards from a fairground organ. With the reassuring background presence of his boss and tutor in the magical arts, DCI Thomas Nightingale, he works to get a few of the SCC employees onside while at the same time having to figure out who he can trust, and who’s behind the 3D printed bird-like drones which aren’t making his work any easier.

False Value is a continuation of the ongoing story of Peter’s tutorage under the Nightingale, and his fantastical relationship with a river Goddess, and is another unmissable instalment of the Rivers of London series. It reads as a homage to Douglas Adams, and fans of The Hitchhikers Guide to the Galaxy will find a plethora of references and heartfelt tributes. Despite the Hitchhikers theme, the book remains solidly planted in the world of river gods, supernatural creatures and wizards living alongside the masses in modern-day London.

If I have one criticism, it’s that Nightingale’s character seems to be in the background, coming to the fore only in his capacity as back-up and rescuer when he’s a shining light in the previous novels. But his presence at the climax of the actions almost makes up for his earlier absences, Peter is as readable and relatable as always, and the familiar supporting cast make merry on the pages.

Full disclosure, I’m a massive fan of the series and I feel like I’d been waiting an eternity for this one to come out. It’s probably not a good starting point for anyone new to the series, and I would heartily recommend going back to the start and indulging in all eight books in order. I envy you all finding it for the first time. False Value is a welcome addition to the collection and long may they keep coming!