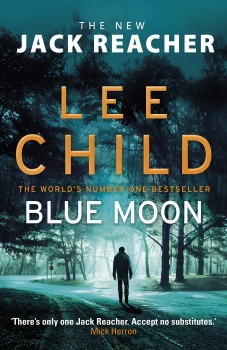 Jack Reacher prevents an old man being mugged on a city street. But why is the old man carrying a large wad of money in an envelope, just stuffed into his pocket?

While riding on a greyhound bus, ex-military cop Jack Reacher spots a wad of money about to fall out of an elderly man’s pocket. Someone else spots it too so Reacher follows the old man and protects him from a mugging. He accompanies the old man to pay in the money and soon realises that the town is under the control of two criminal gangs, the Ukrainians and the Albanians.

Whilst having something to eat in a kerb-side café Reacher meets up with a sassy waitress, Abbi, and notes too the resident gang member obviously keeping tabs on the place. When Reacher helps the old man to his home, he realises that he is in a lot of trouble and decides to help him out. Reacher, Abbi and her friends are soon committed to a complicated and dangerous course of action, not always of their choice.

As always, the style of the book is clipped and bleak. The city streets are empty and run-down, with their fair share of empty shops and impersonal office blocks, all set out in an uninspiring grid pattern with few places to hide. The fear and confusion felt by the old people is absolutely understandable. The writing style supports this context – there are no extra words to soften the descriptions.

Similarly, Reacher’s actions are always calculated very precisely. He assesses a situation down to the last angle and works out in advance exactly what he is going to do. This character trait is another way in which the bleak atmosphere is created and maintained. The introduction of Abby might have softened things a bit, especially with her apartment furnished with second-hand arty things, and her friends being musicians. But unsurprisingly one of the pieces of musical equipment gets used by Reacher as a weapon.  And Abby turns out to be almost as precise as Reacher. They get on well.

The Albanian and Ukrainian gangs feel at times as though they are written tongue-in-cheek. For much of the book, their actions are so similar that it is almost impossible to remember which gang leader belongs to which gang. The killings become almost farcical. However, Reacher uses his understanding of the different status of gang members to good effect to help track down his targets. There is plenty of psychology in the book to inform his actions which is interesting.

Possibly one of the best parts of the book is the sympathetic way in which the old people are described, each dependent on the other, doing their best to cope with their exceedingly difficult situation, but not really coping. Their touching faith that everything will be all right is an attitude often seen in tough elderly people. The description of their house is wonderful, especially when it relates the history of the family, through a series of photographs taken at the same spot in the garden over the years. It provides a snapshot of attitudes and values developed by a stable family and provides a stark contrast to the superficial values of the gang members looking for immediate profit from the misfortune of others.

Although the book is compelling, the first and last part of the book are over-long and at times quite tedious. But no doubt for the compulsive reader it should make for another very acceptable Reacher read.