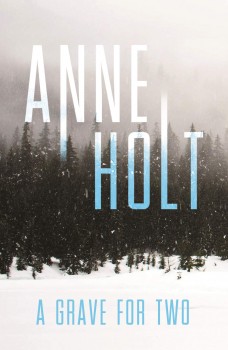 A Grave for Two

High-flying lawyer Selma Falck has lost everything because of her former client Jan Morell, and her own recklessness. Now Morell wants her to clear the name of his daughter Hege, an elite cross-country skier accused of doping. Selma has no choice but to search for the truth.

Starting a new novel by Anne Holt means entering into a world of incredible quality writing, strong memorable characters and impeccable precision in plotting. Add to this the sheer tension and moral dilemmas and you know you can’t go wrong reading another book by the former Norwegian Minister of Justice, now a commanding author.
A Grave for Two is anything but comfortable. Quite the opposite. The personalities playing primary and secondary roles in this thriller, plus Norway and its identity, have a significant part, while destroying some popular images of fresh white snow representing the purity of the typically Norwegian winter sport of cross-country skiing.
The main premise starts with the case of a doping accusation against Hege Morell, Chinese-born and Norway’s best female cross-country skier. Her adoptive father, financier and tough businessman Jan Morell, desperate to overturn this situation and to punish those who might have accused his daughter, will stop at nothing to carry out an undercover investigation. He decides to engage Selma Falck, an incredibly successful high-flying lawyer, celebrity, former athlete, wife to a politician, and mother to two grown-up children.
The small fly in the ointment, or perhaps a stone in a ski boot, is that Selma has lost absolutely everything in recent weeks because of Jan, her former client. Why? Because of her reckless gambling habit and embezzling of his massive funds. But Jan always gives people a second chance, and as he wants to get Hege’s name cleared in time for the Olympics qualifying rounds, he has the power to manipulate Selma into searching for the answers.
Selma is at professional and personal rock bottom, and struggles to focus her mind on invisible links between a minuscule amount of a cold sore cream found near Hege and the impossibility of investigating what she doesn’t understand. Very soon an elite male skier Haakon, her godson, is found dead in very suspicious circumstances, and the post-mortem reveals the presence of the same substance as on Hege. Then Selma becomes entangled in a strange working relationship with Lars, a journalist. She also confesses all her problems and fears to her best friend Einar, a homeless ex-police officer and a murderer in his own right.
As the action suddenly speeds up everybody must deal with more lies lurking beneath the surface of the apparent Norwegian perfection. A desperate naked man in a claustrophobic cell, vague memories of the past awaken by therapy session, a Polish home help, a missing brand new laptop and an ineffective writer … It will make sense at the shocking finale.
Skiing Federation officials don’t seem to care about clearing the names of their two best skiers and instead concentrate on hiding corruption and scandals that if discovered would destroy this highly competitive sport, and all those involved. The web of connections is intricate, complicated and based on knowledge of personal secrets and misdeeds, and in the development of the story it becomes intoxicatingly interesting.
A Grave for Two, superbly translated by Anne Bruce, is the first in a new series, and for those who expect intelligent and gripping modern thrillers.