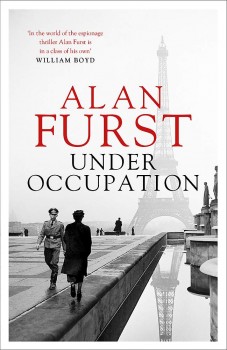 Spying and subterfuge in occupied Paris inspired by the true story of Polish prisoners in Nazi Germany, who smuggled intelligence to Britain through the French resistance.

Under Occupation was inspired by the true story of Polish prisoners in Nazi Germany, who smuggled intelligence to the French resistance for onward transmission to the British. At the start of the book, a man being chased by the Gestapo thrusts a strange-looking document into his pocket just before he is killed. It looks like a blueprint for a new weapon – one that might be important for the struggling Allied forces.

Paul Ricard realises he must try to get it to the resistance but is drawn deeper and deeper into anti-Nazi efforts, travelling deep into Germany and along the escape routes of underground, spying on the Nazi submarine base at St Nazaire. He is thrown together with the mysterious and beautiful professional spy Leila and they work together to pass information to the Allied forces in London.

Despite Alan Furst living for many years in Paris and travelling as a journalist in Eastern Europe and Russia, the book is riddled with basic – and easily correctable – errors. Les Andelys is a commune in the Eure department of Normandy. If you go there by train from Paris you use the Gare St Lazare, not the Gare de Lyon. Rue St Dominique, home to the Ministere de la Guerre, is in the 17th Arrondissement, not the 7th. One of his characters travels ‘west’ from Paris to Switzerland. If I had been in the French resistance and was told by an alleged Spanish Republican he was fighting in Madrid in 1941, more than two years after the end of the Civil War, I’d have shot him on the spot as a double agent!

It just doesn’t work. It feels as if Furst used bits of ideas, scenes and characters, from his working notes. The dates don’t add up, his characters wander around occupied and collaborator-filled France – except when he needs to put them in danger. Apart from the stilted English and some very strange sentence constructions, there is far too much left unexplained. In addition, it is almost impossible to empathise with any of the main characters or care what happens to them as they stumble through a random series of events leading to a senseless ending which reads as if it has been tacked on to get the damn thing over!