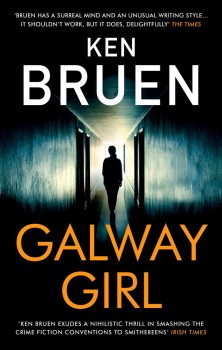 Former cop-turned-PI Jack Taylor is pitted against a trio of young assassins who all have reasons to hate him and who are targeting Gardai as a means to destroy him.

Noir master Ken Bruen reckons that to succeed in Galway a man needs three interchangeable shirts showing support for Galway hurling, Connacht rugby and Galway United. That fiercely tribal attitude is part of the city with its violent, drug-ridden underworld peopled by murderous psychopaths that Bruen so tellingly displays in the 14th of his series featuring former Garda Jack Taylor.

Taylor, now a private investigator permanently on the edge of a mental breakdown following the murder of his daughter, regularly drinks himself into a stupor to cope with a situation which would drive a weaker character to suicide. He has a long, dark history of alcohol and drug abuse and a weakness for vigilante action. But he is anything but weak man. Nor is he a bad man.

In his inimical written quasi-Joycean style – with cryptic literary quotes separating chapters, frequently-changing stream-of-consciousness viewpoints, unexpected flashbacks that mix the chronology, and endless references to Irish culture and the Galway locale – Bruen is again at his best, sharp and sardonic, bleak, lyrical and violent to the point of brutality.

This latest sad, self-destructive, justice-seeking episode in Taylor’s story revolves around a main plot involving a trio of young killers targeting local Guards – but also with the PI in their sights for personal reasons. Their manipulative psychotic female leader, grieving the loss of her lover, seeks revenge for the death. Her sociopathic henchmen, the estranged son of a dead senior Gardai whose murder of a Guard was seen by Taylor, and a burglar whose father he killed, lack her cunning or planning ability.

As the killings mount, the police begin to realise Taylor is somehow connected – and turn to him for help, a move that sparks growing chaos on both sides. Eventually this grim chess game, powered by non-stop action and acerbic wit, builds to a brutal and gruesome climax.

As usual in a Bruen novel, this main plot is not the most important. It’s all about atmosphere and character development, and with so many side plots to be explored and resolved it can take your attention away from the main story.

In his sparse and stylistically-unusual writing – quasi-poetic broken lines; single words to a line; visual typesetting effects involving single words spaced across and down the page – Bruen creates a surreal and dreamlike atmosphere in which the staunchly Catholic city of Galway itself plays as important a role as any of the characters.

As always, the Church comes under fire, shared with characters as different as Ireland’s ‘gay Indian’ prime minister and Donald Trump! Music and books too play their part. The gritty, raspy singer-songwriter Steve Earle’s brilliant The Galway Girl provides a fitting accompaniment to a deeply flawed, but somehow almost endearing hero, whose bittersweet voice and tragic and transformative suffering give the series such power and bite.

Taylor is a cynic with a big mouth. He understands how the real world works and is not afraid to shout about it. But underneath he is always willing to rush to help those who can’t defend themselves – even if it involves him in what can only be described as vigilantism as judge, jury and executioner. If you’re new to Taylor, don’t worry about the shocks. Bruen has developed a technique of letting the reader know what they need to about his past in a few words.

Although this can easily be read as a standalone, it’s worth going into Jack’s back story to fully appreciate his character, his gift for the blarney, smartass asides, plain speaking, poetic melancholy – and downing shots of John Jameson’s always without ice – which drive this dark and brutal series that underlines Bruen’s total dominance of this peculiarly Irish version of the deepest noir.