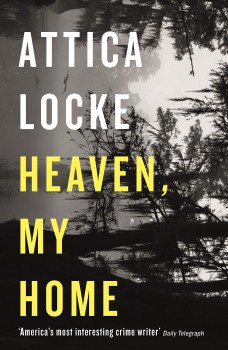 Texas Ranger Darren Matthews is sent to Caddo Lake where a nine-year-old boy is missing, the son of an imprisoned white supremacist.

Heaven My Home is the latest episode in the life of Darren Matthews, a black Texas Ranger who is fighting against the sense that to many of the whites he is invisible, and sick with the sense of betrayal at the election of a new president whose supporters think little of Darren’s right to a share of the country in which he was born.

He also has serious personal problems. The local DA suspects that Matthews is concealing the involvement of his friend Mack in the shooting of Ronnie Malvo, and Darren’s mother has acquired the gun in that case and is using it to extort from her son the attention she believes she deserves.

Matthews’ boss sends him to Caddo Lake, where Levi, a young boy, failed to return home after taking his boat out on the water. The Rangers’ interest is not so much in recovering Levi, but in the opportunity it represents to put pressure on his father Bill King, a big name in the ABT, the Aryan Brotherhood of Texas, who may be willing to admit to criminal activity in exchange for action to recover his son.

Matthews finds King’s family living in Hopetown, a small settlement by Caddo Lake occupied by small remnant of a once-thriving community of local Native Americans and ex-slaves. Part of the land, leased to King, has now been filled by white trash in trailers who are abusive and aggressive towards their neighbours.

Hopetown is situated on land in the ownership of Leroy Page, who is in negotiations to sell the land, although details of the purchase are somewhat murky. Leroy claims to have seen Levi arrive home, the last sighting of the boy, and his friction with the whites nearby makes him a suspect with the local police.

With Levi gone for several days, local police have little confidence that he is still alive. They like Page for abduction of the boy, and even Darren’s FBI friend Greg is excited at the prospect of a conviction for a black on white crime which will play well in the media. Matthews needs to find Levi to repair his own sense of justice even though he admits the boy will probably end up as bigoted as his father.

Darren’s ambivalence reflects the dichotomy in beliefs held by the two uncles who brought him up, his father lost in Vietnam and a disinterested mother. His uncertainties about the women in his life, how he should respond to the prejudice he sees all around him and much else are compounded by his tendency to drink too much, but his perceptions are not dulled and through him the author powerfully conveys just what it means to be black in contemporary America.