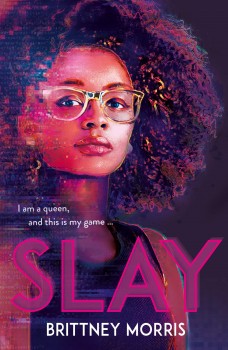 By day, 17-year-old Keira Johnson is one of only three black students at Jefferson Academy. By night, Keira is Emerald, queen of the universe she has created in the online multi-play game SLAY. When a boy is killed in a dispute originating in the game, Keira must fight to preserve the world she has created from those who want to see it taken down.

By day, 17-year-old Keira Johnson is one of only three black students at Jefferson Academy. The others are her younger sister Steph and her boyfriend, Malcolm. Keira’s best friend at the academy is Harper, who she tutors in maths. Harper and her brother Wyatt have a habit of using Keira as the oracle on all things related to black culture, much to Keira’s irritation as she knows she’s not capable giving the simple answers they’re looking for on such questions as whether it’s cultural appropriation for white people to have dreadlocks. Keira can only speak for herself, not all black people, but it’s hard for her to get that concept over to her friends.

By night, at home in her bedroom, Keira is Emerald, queen of the universe she has created in the online multi-play game SLAY. Keira developed the game from scratch, but now has help from Cicada, someone she only knows by their online name. The two work together devising new aspects of the role-playing game in which characters duel each other using cards that give their users specific attributes and thereby amassing coins to spend in the game. Each card represents an aspect of black culture around the world.

SLAY has become vastly popular in the online gaming community whilst remaining largely invisible to the outside world, but all that changes when teenager Jamal Rice is killed in a dispute over the coins that can be acquired in the game. With the spotlight on SLAY and its developer, academics and others rush to appear in the media debating whether SLAY is inherently racist because it excludes white people. And then the threat of litigation is suddenly hanging over Keira’s head as the press and many members of the public are clamouring to expose the mysterious Emerald and take down the world she has created.

I came to Brittney Morris’ stunning debut as someone whose only experience of gaming is obsessively playing Doom for a long time, including the multiplayer version on my firm’s office network after hours. I loved it but missed out on the online phenomenon of games such as World of Warcraft, which is probably as well, in terms of getting other stuff done, and I’m also one of the people who feel really ill when trying to use virtual reality headsets.

Despite those limitations, I was immediately sucked into the world that Keira has created, and empathised with the strong bonds that can form in online communities even when everyone you interact with is behind the veil of a user name and, in gaming, the character they’ve created for themselves. It would be missing the point of the book by a mile for me to generalise about how readers will relate to SLAY. All I can say is that I was absolutely blown away by this strong, perceptive young adult novel that opened my eyes, as a white woman, to aspects of black culture that I had known nothing about.

SLAY is a book that cuts across any form of narrow cultural focus and shines a penetrating spotlight on the issues facing teenagers like Keira who have been forced to suppress their own sense of self to conform to what are seen as societal norms. I was cheering for Keira and Emerald, her character in the game, in all of the duels and confrontations she faces, I wanted to private message her with capslock on to warn her about her controlling boyfriend, who comes over as decidedly problematic in attitude towards Keira and SLAY.

I would be fascinated to know how others relate to this book and whether they believe that online communities and games such as this take over the lives of their users to too high a degree or whether they can see and empathise with the empowerment that comes from a world such as the one Keira Johnson has created. I have many friends with whom I first connected with online who are now a huge part of my life. I understand the strength and value of online communities and I hope that SLAY will at least provoke others to reassess their own views and possible prejudices.

The greatest tribute I can pay to this book is to say that I was left wanting to play the game, willing to try to overcome my motion sickness when wearing a virtual reality headset. I wanted to get to know Emerald and the other games, and I wanted each and every one of them, and those who immerse themselves in the world Brittney Morris has created, to succeed in their online endeavours, carrying that confidence over into the rest of their lives, feeling as empowered as the SLAYers. I loved the depth that Morris gives to her characters and the way she is always ready to challenge perceptions and, like Angie Thomas’ The Hate U Give, this is a book that changed the way I view the world.

Morris has a confident writing style and the ability to craft fully-rounded and real characters. Her descriptions of the online duels are as heart-in-the-mouth and finessed as any adult thriller. This is a book that can hold its own in any company, like both Keira and Emerald.