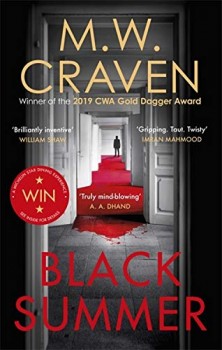 When a supposedly dead woman turns up at a police station, an old case comes back to haunt Washington Poe.

A woman turns at a remote rural police station claiming to be the daughter of celebrity chef Jared Keaton. Initially she’s met with disbelief, as Keaton is in prison, convicted of the murder of his daughter, whose body was never found. Doubts about the dead woman’s identity are quickly quelled after tests by the force medical examiner prove conclusively that she is who she says she is – Elizabeth Keaton, not dead, after all. And if she’s not dead, then her father is innocent of her murder, which means that Washington Poe, then a DI in Cumbria, was instrumental in putting an innocent man behind bars.

Poe, now demoted to DS and working with a department of the National Crime Agency, is summoned to Cumbria to answer to Detective Superintendent Gamble. Despite a seemingly irrefutable chain of evidence on the blood taken from the woman who claims to be Elizabeth Keaton, Poe doesn’t believe he got it wrong where Jared Keaton is concerns. He’s convinced the man is a killer and that the woman is an imposter.

But it doesn’t look good for Poe, especially when even his friend Tilly Bradshaw, a civilian analyst with the NCA, can’t see any flaws in the chain of evidence that proves Elizabeth Keaton is very much alive. If Bradshaw, the most brilliant person Poe knows, can’t find a way around the problem, then it seems increasingly unlikely that anyone else can, but even so, he still refuses to countenance the thought that Keaton might be innocent.

Then the woman claiming to be his daughter goes missing a second time.

I first encountered Poe and Bradshaw in The Puppet Show, when the pair were on the trail of a serial killer in Cumbria known as the Immolation Man, from his unsavoury habit of burning his victims alive in prehistoric stone circles. I’m not a fan of the serial killer end of the genre, but the pair quickly won me over and I was keen to see how their unlikely friendship developed. Black Summer didn’t disappoint, either.

This is something of a locked room mystery where the evidence is concerned, and that puzzle lies at the heart of the plot, while around it, Poe’s life – and career – are on a definitely downhill spiral. With it looking increasingly likely that Jared Keaton’s conviction will be overturned, Poe and his friends are in a race against time to find the woman they believe is an imposter and prove that she can’t be who she says she is. I certainly couldn’t work out how the trick had been pulled off, but neither could the scarily bright but socially totally hopeless Bradshaw, so at least I was in good company.

Poe and Bradshaw are backed up by Poe’s other friend and colleague, DI Stephanie Flynn, and I was impressed to see how far she would go to help her colleague. Flynn is the archetypal good copper, but in Black Summer she showed she’s capable of going a very long way out on an extremely shaky limb for a friend. I like Flynn a lot. She’s strong and very no-nonsense and watching her interaction with the extremely literal-mind Bradshaw is always a delight.

Poe’s unwavering belief in Keaton’s guilt manages to avoid tipping over the line into irritating arrogance and I remained firmly on his side throughout the investigation. He’s intelligent and likeable and, so far, nothing bad has happened to his springer spaniel, Edgar, so that gets my vote, too! The mix of good characters, a devious but never outright impossible plot, and the beautiful backdrop of Cumbria is a winner in my book.