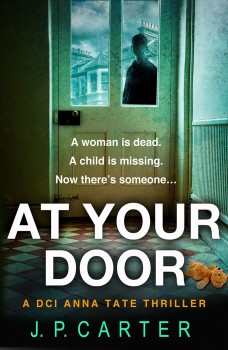 When DCI Anna Tate looks down on the body of the brutally murdered girl, she cannot know people on high will soon be looking down on her every move.

A woman out walking her dog discovers the barely concealed body of Holly Blake on Barnes Common, London. But this is not a murder that ranks among the ever-growing list of futile knife-crimes. Holly was a known model and the daughter of the former assistant commissioner, Rebecca Blake, who is now running for the position of Mayor of London.
DCI Anna Tate must tread carefully, and with an enormous amount of tact. Even more so when she discovers that Holly had been having a long-term affair with a prominent MP, the sordid details of which are about to hit the headlines. But that is not the only twist in this affair that will test Anna’s attention. Her last case has rekindled interest in the investigation of her own missing child. She must not allow recent sightings to distract her as Holly’s murder gathers a handful of likely suspects.
As always, I plunged in and read this story without referring to the bumf on the back cover or anywhere else. It didn’t take long to work out this story is part of a series and is in fact the second DCI Anna Tate book. I felt dissatisfied to learn that JP Carter is the pseudonym of an author, who has already written 16 books (under the names Jaime and James Raven).
The police procedural obviously focusses on the protagonist, Anna, but the story is average curdled to a mediocre dull thanks to the writing style. And the clues hide under neon lights, so no surprise that the perpetrator is obvious from the moment of their arrival on stage. The sub-plot telling the story of Anna’s abducted daughter, which entirely excludes the protagonist, is far more interesting and the only reason I didn’t throw the book on my pile of “when I am bored rigid and really don’t want to clean the cupboards out” rejects!
The problems with the writing are numerous, including bad grammar and clunking sentences. There is a huge amount of tautology, swathes of tell, and writing that is so dumbed down one would believe the author thinks we are all on the dense side of stupid. The dialogue is lazy and riddled with the classic, “as you know, I live next door to you,” style of information-dumping. Description is of the brown-hair-blue-eyes variety, and as for the backstory/dream scenes; they are unsubtle and completely pull the reader out of the story.
The characters, while somewhat banal, are reasonable and would have been more interesting and infinitely more developed if the author had let them come out from behind the tell-curtain and instead show us their traits.
There are many missed opportunities for cranking up the dark atmosphere and suspense aspects of this story, rendering this an easy, fast, but distinctly average read.