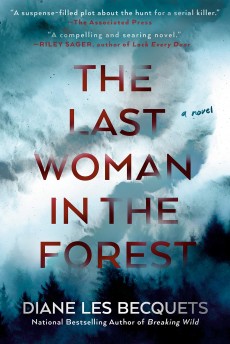 The Last Woman in the Forest

Marian is offered an opportunity to work with rescue dogs on environmental projects and falls under the spell of her mentor Tate. Several months later after Tate’s tragic death she realises that he might have been responsible for the unsolved murders of at least four women.

Marian Engström, a young American woman, has found her true calling as she finally has an opportunity to work with rescue dogs to help protect endangered wildlife. Although she has had to leave her own dog with her parents, Marian is delighted to be joining a dedicated team of conservationists on her first assignment in northern Alberta in Canada. She meets one of the leaders, Tate, the daring, brilliant and exciting mentor who teaches her how to develop her orienteering skills and how to become an intuitive and confident dog handler.
Soon she falls under his professional and personal spell, and when Tate showers her with attention and compliments she falls in love. Occasional moments of harsh reality don’t dampen her spirits. She’s determined to prove to Tate and others that she’s deserving of his love and that together they will be able to work with dogs on research projects all over the world.
As they are separated from each other on new assignments Marian is devastated after Tate’s tragic death in the wilderness. While reminiscing about their relationship she slowly starts discovering inconsistencies about this charismatic man’s life, little tales that might not fit into the narrative that he had spun for her, memories of blank looks and emptiness in his eyes.
And she is concerned that the man she loved might have been somehow involved in unresolved murders of four women, found over the years in the Stillwater State Forest, near Montana. He said that he had found a body in the woods, yet something felt odd about his cold reaction to the shocking discovery.
While putting together the pieces of highly emotional puzzle she contacts a retired forensic profiler Nick Shepard. What she really hopes is to clear Tate’s name. However, as she recreates the short but intense relationship, Marian realises that nothing was as she had believed. Nick is still haunted by the open cases of young women, killed in a similar way. Time is running out, though, as he’s suffering from advanced brain cancer. Yet he feels compassion for Miriam and still is interested in the personalities of the victims and toxicity of the killer.
The Last Woman in the Forest tells a powerful story about the innermost feelings and desires, encompassing trust, intuition, love, grief, self-preservation. Throughout the novel Diane Les Becquets shows her passion for and understanding of the wilderness: forests, mountains, air, wind, rain, snow. She creates visually stunning landscapes as main characters collect the droppings of rare threatened animals, record information about isolated wild areas, wind their way across snowy emptiness or enter the dangerous paths under the hot summer skies. The vivid beauty of the tundra and mountain ranges is breath-taking.
Both humans and dogs play an important part in this story of dependence and reliance. But as Marian’s search for painful truth emerges from her soul and she exposes her own vulnerability, the environment becomes more hostile and unpredictable. The evil hidden somewhere behind the trees or in the darkness is always present and so the tense atmospheric air does not allow the main heroes to slow down and breath peacefully until the final devastating discovery. Les Becquets’ take on the serial killers is interesting and compelling, and her novel truly unforgettable: mesmerising and wonderful in equal measure.