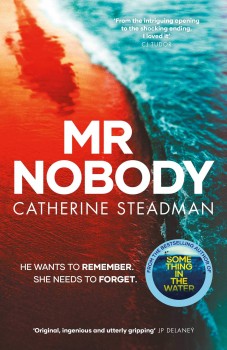 A man is washed up on a Norfolk beach with only vestiges of memory. Neuropsychiatrist Emma Lewis is asked to help, but returning to Norfolk will bring her face-to-face with a past she is keen to forget.

A man is found on a Norfolk beach with a wound to the back of his head, drifting in and out of consciousness and unable to speak. When after a few days he does recover his voice, he claims that his memory about his past life is limited to a few glimpses. The press find him irresistible and dub him ‘Mr Nobody’, although staff at the local hospital call him Matthew.

Neuropsychiatrist Dr Emma Lewis is an expert in the field and is invited by a senior specialist to the hospital to take up the case. Professionally it offers exciting possibilities, but the location gives her concern. She has spent the last 14 years under an assumed name after an incident in that part of Norfolk in which her family narrowly avoided death and were subsequently vilified in the media.

She decides to accept the post and is able to confirm that Matthew’s loss of memory is real, and no trick. But she is baffled when he identifies her as Marni, her old name. When her history is revealed to the press and she is attacked, Matthew responds in such a way as to suggest he is militarily trained. Despite her confusion, and advice from family and friends that she could be in danger, Emma is determined to get to the truth.

The initial premise here has strong echoes of Jason Bourne, especially when Matthew’s military prowess becomes apparent, but the author takes us in a different direction. Chapters alternately focus on different characters, mainly Emma and Matthew, so we understand that Matthew is memory-impaired, although recall is triggered by certain cues that have been left for him, for reasons which only become apparent in the final pages.

Emma’s back story emerges in dribs and drabs, which I found irritating, nearly as irritating as the woman herself. Her ‘expertise’ was largely one we are told about rather than demonstrated. She is, however, a master of putting herself in unnecessary hazard and flirting with hysteria. You can rely on her to leave her mobile at home and dump the police protection detail if she decides to put herself in harm’s way.

The final few pages explain what had been going on for those who like all the detail, and the conspiracy arranged by various parties to conceal what had been happening from public view. Why that should be necessary is not entirely clear and given the rapaciousness of the press in the book unlikely to be successful.

The section prior to this is perhaps the most successful, certainly the most exciting, when Emma faces real danger and given the indications about her character mentioned above responds like a hero.