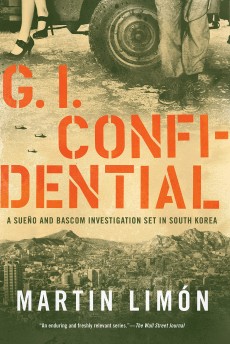 US Army CID agents Sueno and Bascom investigate a South Korean bank robbery which has all the hallmarks of military involvement.

Twenty years after the suspension of war with the North, the US Army remains present in large numbers around Seoul, only a few miles from the border, ready for a resumption of hostilities at any moment. South Korea is under the military dictatorship of Park Chung-hee, who cracks down at the slightest sign of political dissent.

A bank robbery made with military precision has all the hallmarks of US army involvement, an embarrassment to both the Korean regime and the US alike, who would prefer the matter to be swept under the carpet. But 8th Army CID Sergeants George Sueno and Ernie Bascom take an interest, and after their involvement is made public an attack against them shows that someone is paying attention.

The unwelcome publicity is thanks to Katie Bird Worthington, a pushy reporter for the Overseas Observer, a scandal sheet better known to the soldiers as the Oversouped Observer. Katie has a story, with pictures, about the supply of women for sex to top echelon military near the front line, an even more ignominious revelation. Sueno and Bascom are told to find a way to discredit the report.

This is the 14th Sueno and Bascom story, set in Korea in the early 1970s. The two detectives make a great team and share a dry sense of humour which extracts the maximum amusement out of the idiocies of military governance, especially a military placed in semi-isolation from the surrounding society, which it entirely fails to comprehend.

The two detectives’ efforts to speak a little of the Korean language and understand local customs and traditions in fact mark them out as something quite unusual. As might be imagined, it also helps to gain the trust of locals who are in a position to assist in their investigations.

Not that the pair don’t also have their sources within the military too, in particular Strange, their ‘deep throat’ in the Judge Attorney General’s office who is prepared to trade top echelon scuttlebutt for tales of wild sex, either factual or imaginary, which Bascom is happy to provide. Strange has news of odd behaviour from a general which turns out to be a distortion of the truth - and to conceal a dispute which could destabilise South Korea and compromise national defence.

What makes the book so enjoyable is the combination of the detectives’ laidback and knowing approach to the resolution of problems which arise within what is essentially an army of occupation, together with an open-minded perspective about Korean culture and the views Koreans have about things. You can have a good time and learn a bit of stuff about a foreign country at the same time; this is definitely my kind of book.