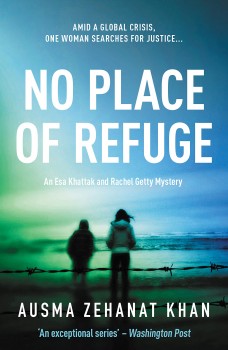 No Place of Refuge

Esa Khattak and Rachel Getty travel to a Greek island where a friend working to aid refugees has disappeared.

This book is a further instalment in the series starring Esa Khattak and Rachel Getty of the Community Police Service in Canada, which spotlight the plight of Muslims in particular displaced by political convulsions during the last few decades. Earlier books featured expatriates from the Balkans resettled in Toronto, and those threatened by the regime in Iran. Here the focus is those fleeing the conflict in Syria.

The book begins in Toronto, where Khattak and Getty are receiving plaudits from the Canadian prime minister and being asked to help find Audrey Clare. Audrey had been working with Woman-to-Woman, a charity assisting refugees arriving on the Greek island of Lesvos, primarily Syrians fleeing the war in their home country. Clare went missing immediately after a refugee and an Interpol agent were shot.

Khattak and Getty fly out to Lesvos. They discover that Audrey had been disbursing large sums and travelling to Turkey and to the Netherlands, but it is several days before it becomes apparent what she was doing, and who would seek to prevent her from operating.

In the course of their investigations they see first-hand how dangerous is the sea crossing from Turkey attempted by those desperate for asylum in Europe, the deplorable conditions in the camps in Lesvos, and the lack of sympathy from many locals and from governments in Europe. The author also gives plenty of detail about why the refugees are leaving – Assad and the Mukhabarat, his security service which specialises in torture and murder.

Much of this background is familiar to Europeans, although might be less so to Americans and Canadians. As with Ausma Zehanat Khan’s previous books one feels torn - while it is admirable that the facts be more widely disseminated it seems almost obscene to use such material in the service of fiction.

In any event, the scale of the disaster to Syrian families is such that the concerns of the protagonists of the novel seem paltry by comparison. This impression is heightened by the focus on the feelings of the key characters, with action ever interrupted by passages of emotional interpretation.

Getty hopes for a relationship with Audrey’s brother Nate, but is sympathetic to his distraction – for many years she too was occupied by a brother who went missing. Khattak is close to a woman called Sehr but the possibility of consummation is complicated by his feelings about his dead wife. Great wads of this sort of thing in the minds of the primary actors in this drama slow the plot development to walking pace.

This is perhaps a book about which readers might hold very different opinions. There are passages of beauty as well as horror and the factual context is important, but some may find the drama overdone and the protagonists altogether too self-absorbed.