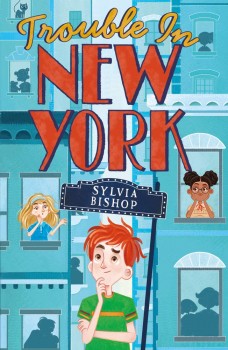 Jamie Creedon doesn’t just want to deliver the news, he wants to write about it, and not only in his school newspaper. When he gets the chance to visit the offices of the Morning Yorker, he doesn’t realise quite how dangerous his life is about to become.

Every morning before school, young Jamie Creedon delivers the newspapers in Brooklyn, New York. He rides through the streets delivering the Morning Yorker. He’s always punctual, no matter what the weather is like, and he makes sure that everyone gets their paper to read over breakfast or before going to work. But Jamie wants to do more than deliver the news – he wants to write it as well. He already writes for his school paper, but his ambitions run higher than that. Much higher.

When Jamie gets the chance to do an extra round one morning, he’s rewarded by a meeting with his hero, Harry Hooper, the owner of the Morning Yorker, who takes a shine to Jamie and invites him to the newspaper’s offices for a day.

Jamie finds himself drawn into the murky world of behind the scenes of the news in New York. He gets caught up in the mystery of a missing actress and is targeted by some nasty villains. Help comes from some unlikely quarters, including Harry Hooper’s niece Eve and Rose, the daughter of a New York firefighter who’s not been able to work since a nasty brush with an arsonist who’s been plaguing the city.

Jamie and his new friends have to navigate some very murky waters and it looks likely that Jamie will lose his idealism, as well as struggling to stay one jump ahead of the bad guys.

I adored Trouble in New York. The 1960s setting is perfectly captured, and the three young protagonists are all sparky and well-drawn. A sense of real danger permeates the story, especially in the scenes that deal with the mysterious arson attacks. Jamie, Eve and Rose all prove to be able to stand their ground with style, even when the odds are heavily stacked against them. They’re all ingenious in different ways and complement each other, but their friendship and their loyalty is tested to breaking point at times.

There are as many crosses and double crosses as in any adult novel. The baddies are suitably bad, but nothing is ever quite as clear-cut as it appears, and there is no lack of subtlety. This is a classy crime story for middle grade readers, that will almost certainly appeal to anyone who enjoyed Robin Stevens’ The Guggenheim Mystery and Katherine Rundell’s The Good Thieves.