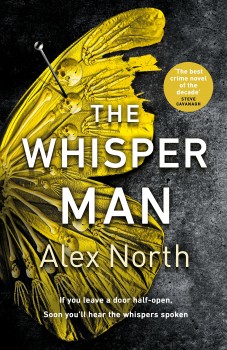 Tom Kennedy and his young son Jake are making a fresh start away from the grief associated with the house where Tom’s wife died. Tom doesn’t expect to be plunged into another nightmare when Featherbank proves not to be the safe haven he’s expected for a boy of Jake’s age.

Tom Kennedy is still reeling from the death of his wife. He’s having trouble establishing a connection with his seven-year-old son Jake and doesn’t know what he can do to bring the boy out of the hard shell that’s grown up around him. In the hope of a fresh start, they’ve moved to the picturesque village of Featherbank to a rather odd-looking house that only a very charitable observer could describe as ‘possessing character’.

For someone keen to make a fresh start away from the shadow of death, Tom hasn’t really done his homework. Fifteen years ago, a serial killer who became known as The Whisper Man (because of course serial killers always have to have a nickname, it’s A Rule) brought terror to the village by abducting and murdering young five boys, all around the same age as Jake. But that’s ancient history now… or maybe not, as the past seems determined to come back to haunt them all, when another boy goes missing.

It’s unusual for me to hook up with any books with a serial killer angle, but after a recent success in this area, I decided to put away my prejudice and approach this mix of police procedural and psychological thriller with an open mind, and I’m glad I did. The Whisper Man is deeply creepy, gradually building up layers of suspense and winding them around the story like the wrappings on an Egyptian mummy. And we all know what happens when you’re left alone with one of them! I managed to stop myself getting grumpy about authors writing under a pseudonym – Alex North is another name for established crime writer Steve Mosby.

The first hint that there’s something odd going on is when young Jake starts talking to an imaginary friend, but this is a girl, not a boy, so there’s no immediate connection with the main story. I had a lot of sympathy with Jake, who likes playing by himself and does a lot of drawing. He carries around a packet containing things that are special to him, which immediately makes him the sort of small boy I could empathise with. When he gets into trouble at school on his first day there, I was rooting for him, and was glad when the bullies got their comeuppance. And then when he gets on the wrong side of the headteacher, I was cheering for Tom when he finally stands up for his son.

The idea of a serial killer who stands outside rooms whispering to children is the sort of concept that quickly gets under your skin, playing to the sort of primal fears that scratch at the edges of your consciousness on dark winter nights, crying to be let in. My only issue with the book is that it lacks any particular sense of place. Featherbank seems characterless, a sort of ‘off the shelf’ location that hasn’t been in any way personalised.

The psychological suspense angles are well-handled and there are plenty of chills and thrills. I was brought up in the shadow of the infamous Moors Murders in the north of England; the picture North paints took me back to the painful days of the 1960s when communities lived in fear and came together in grief, and this more than made up for the somewhat generic setting.

It’s hard to know where justifiable fears end and the supernatural begins in this chilling exercise in psychological noir. I’m always happy with a suggestion of things that go bump in the night, and this is a book where the elements can have either a mundane or a supernatural explanation, although I know on which side of the line I stand when it comes to making that judgment.