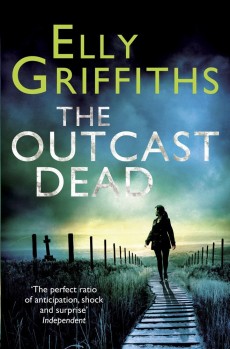 Archaeologist Ruth Galloway has uncovered bones which may belong to a Victorian murderess. But DCI Harry Nelson has a more modern death to worry about.

After last time's fairly weak outing to Lancashire, archaeologist Ruth Galloway is back on home ground. All the usual suspects are there, with the exception of tame druid Cathbad, who's stayed oop norf, and with the addition of policeman Tim, who's come south to join DCI Harry Nelson and Co.

This time out, Ruth's career is on the up. She has written a book about the Lancashire findings, has made some very interesting discoveries close to home, and has been asked to appear on a TV documentary about the sinister Jemima Green – the so-called Mother Hook, who was hanged in the 19th century for allegedly murdering children under her care. The TV crew are pretty colourful, including American historian Frank. His first meeting with Ruth is what you might call eventful ...

There are sprogs galore in The Outcast Dead, so consider yourself warned if you don't play nicely with books containing cute children and animals! Nelson's big case is establishing whether Liz Donaldson killed her son – her other two sons died some years ago. And blimey, Elly Griffiths' cast don't half have tangled love lives – Ruth's offspring Kate is Nelson's daughter, and Michael, son to DS Judy Johnson, is Cathbad's offspring. There's also a surprise visit from Ruth's brother Simon, with his two lads in tow.

A new Griffiths novel is a treat. She has a light hand with her writing, a sure grip on plotting and an absolutely riveting cast. Ruth, who is not your usual stick-thin female lead, has her private angst, but it never gets in the way of her doing her job.

Much of the fun of this series is the supporting cast. Phil, Ruth's head of department, is a blithering idiot, given plenty of space to blither this time out because he fancies himself as a TV star. In the wrong hands, Cathbad could have been a thoroughly unlikely character, but Griffiths makes him indispensable to both Ruth and the series. And there's some jockeying for position on the police front between new boy Tim, and established plods Judy and Clough.

The setting really sets the seal on what's a delightful series. The action sweeps from Ruth's remote cottage by the salt marshes to creepy castles at night and the narrow lanes of Norwich. When it comes to The Outcast Dead, Ruth is a star both on and off the small screen.