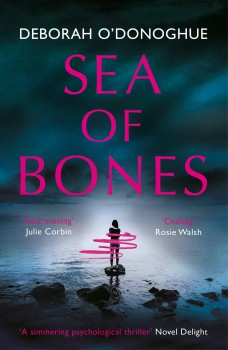 The coroner’s report states suicide, but Juliet MacGillivray cannot believe her niece would have taken her own life.

When Beth Winters, an art student, commits suicide, it brings her high-flying aunt Juliet MacGillivray to her knees. The longer the coroner’s finding has time to fester, the more Juliet has difficulty accepting this conclusion. In the end, while the muck flies around her boss’s political suicide, Juliet takes time out from her position as chief of staff and goes back to her summerhouse in north east Scotland where Beth was living until she supposedly took her life.
Juliet realises increasingly that there are people who do not appreciate her meddling questions and her refusal to let go – dangerous people who have far-reaching power. When her partner Declan becomes involved, he too finds out to his cost and that of his friends that there is no such thing as an idle threat.

First, a criticism of a part of books that normally I ignore – the front cover. Ninety-nine per cent of readers know from the outset that if the premise is the protagonist uncovering the truth about someone’s suicide it will turn out to be a murder or at the very least a ‘coerced suicide.’ But to contradict the blurb on the back cover (that teases the reader in with was it or wasn’t it a suicide) with a hook on the front cover that makes it clear the girl was murdered is ridiculous and incomprehensible.
Sea of Bones, despite its underwhelming title, is a powerful debut novel. It’s written in the third person past tense, and I expected to stay somewhat distanced. But the quality of writing and the atmosphere the author builds through brief but evocative description hauls the reader into the milieu and suspense.
It has its weak points, including the annoyingly slow first half (despite the short chapters), and the lesser characters who come, take up a lot of page-space then disappear like the Loch Ness monster, never to be seen again.
Bubbling under the main plot are topics that flesh the characters out. Perhaps the most significant one is mental illness; it adds to the suspense by affecting people’s opinions, including Juliet’s self-perception. Erica, Juliet’s twin sister, suffers with bipolar disorder, a diagnosis the media loves to dangle when referring to Juliet and her position as chief of staff, as if it may taint her political party. Juliet believes that her sister’s bipolar disorder may have made it easy for the police and coroner to pronounce Beth’s death as suicide.

Another topic the author covers in some detail is the sexual exploitation of minors. There are ugly scenes which may make some readers feel decidedly uncomfortable. Immigration, political corruption and manipulation by the wealthy also have their time on the page.

Juliet is not my favourite protagonist. She comes across as rather cold, self-absorbed and verging on a hypochondriac. Despite her supposed love for her niece, her behaviour and introspection contradict this at times. With the ever-increasing character count, I found the rest of the crew slightly superficial and difficult to connect with. It doesn’t help that they often behave unrealistically.
There is too much falling action after the climax, and the ending does have one or two weak points. But this is good escapism and there is meat on the bones. This is a sharp debut novel.