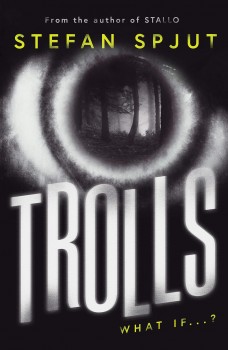 When a huge wolf escapes his captors and a dangerous cult leader escapes the psychiatric facility it can only mean that a young woman, Susso, might be in danger again. Years ago she killed a troll and since then her life has been traumatic.

I have always liked trolls but right now I’m not sure about some of them! Trolls, the supernatural thriller and second book by Stefan Spjut, is set ten years after his debut Stallo, and again focuses on a young woman Susso Myrén. But before we grasp how the two novels fit together it is important to trawl through myriad bizarre thoughts and surreal emotions.
Three events happen around the same time and it takes a while to work out how they are connected in the northern part of Scandinavia.
A massive wolf escapes his captors which leaves one of them dead and the other severely traumatised. Anders loses his job as scientist and also a sense of perspective of things after his colleague Geir is killed by the animal. His family life falls apart, and soon he is on the road with a Finnish ‘wolf woman’, unable to explain why he is so disoriented and unable to remember own actions.
A mysterious dangerous cult leader, Lennart Brösth, breaks out of psychiatric facility and soon assembles his faithful followers. He claims to be about 100 years old. His ruthlessness knows no bounds, and his magnetic psychic abilities allow him to execute any horrendous ideas he has.
A disillusioned traumatised woman, Susso, is forced to end her self-imposed exile in the forest. She has cut contact with everyone, including her mother Gudrun and best friend Diana. But the two women are concerned about Lennart’s escape and dramatic past events and try to reach to her.
The trio of strands starts forming a semi-coherent story as both Susso and Diana get kidnapped by Lennart’s friends. Meanwhile before Diana manages to escape, her husband and Gudrun realise that the consequences of being influenced by trolls are totally incomprehensible.
I want to quote this excellent explanation rather than paraphrasing it so you will have the motives and reasons in a nutshell: ‘The thing is that trolls like children. Just like in the stories … That was what the Jillesnåle Cult were doing. They protected the trolls and kidnaped children for them. And Susso was one of them … and when they tried to kill her, she ended up killing a troll.’
The irrational atmosphere amplifies the powerlessness of otherwise sympathetic characters manipulated by animals, controlled by immortal squirrels or menacing mice, and other mind-controlling enemies: ‘Trolls are real. The reason you can’t find them is that they hide in animal form. They can shapeshift… Some are mice, others are bears.’
It’s a peculiar and chilling dark tale, translated from the Swedish by Agnes Broomé, and convincing in its use of supernatural elements and folklore that have been around for ages. What makes is so unsettling is the modern context and references crossing the boundaries between reality and what is considered a fantasy, such as a photograph of a troll, believed to be real for a long time, and the existence of humans with tails.
The author also explores mental health issues that might be triggered by telepathic animals and causing odd behaviour such as chewing off one’s own hand so nobody would see claws growing, or murdering a man because the animal took over the mind of a reasonable person. This is Scandi horror at its strangest.