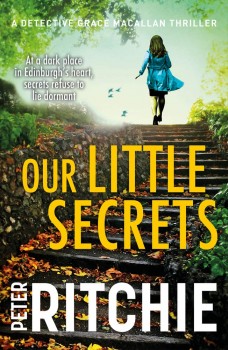 The ambitious and hard-bitten DI Janet Hadden seeks help from a gang boss to boost her own career. But in a fast-changing underworld there’s always a price to pay.

If you haven’t come across Peter Ritchie before, you’re going to be in for a shock. Gritty, raw, brutal, psychologically damaged – none of these words totally describes his searing descriptions of crime and corruption in Scotland’s capital.

Ritchie should know. Staring his working life at 15 as a deep-sea fisherman, he moved on to  the police, serving in all ranks in the CID, Murder Squad and Scottish Regional Crime Squad before taking over the Organised Crime Unit at the National Criminal Intelligence Service in London where he set up and ran a multi-agency team involving law enforcement and the security services before winding up as UK Liaison Officer to Europol in The Hague. With that kind of experience there is no one better to write about the vicious circle of organised crime, police and political corruption which today affects so many of our major cities.

In this, the fifth story in a fascinating and informative series, he continues the career of his protagonist Grace Macallan, now posted to the Counter Corruption department in Police Scotland’s headquarters at the Police College, Tulliallan Castle, in Fife. But Grace does not make an appearance until well into the story which concentrates instead on establishing a solid and realistic background of the problems and opportunities of organised crime in the country’s capital.

Edinburgh’s gangland is in a state of turmoil. A new breed of computer-smart, business-oriented criminals is challenging the more simplistically brutal domination of the old order, the battle as always for control of territory to distribute their specialities, whether it be drugs, human trafficking and prostitution or simply ‘licensing’ – and taking a cut – from low-level crime.

All the old certainties are gone – with even Edinburgh’s traditional divide between Catholic and Protestant communities, no better illustrated than by its opposing soccer teams, thrown aside and gangs with allegedly Catholic traditions happy to deal even with the hardened extremist terrorist survivors of Ulster’s Protestant UDA and UDF.

Among the coming faces are the Grainger brothers, run at as far a remove as possible by elder brother Dominic who is constantly challenged by his two far more violence-prone half-brothers. To add to his problems, he has a serious gambling and womanising problem and a totally damaged and marriage in name only to the only child of the city’s former brutal, but now semi-retired crime boss, Arthur Hamilton.

Into this mix, Ritchie introduces the ambitious, hard-bitten and risk-taking DI Janet Hadden. A loner with a major personality disorder, she is convinced she has been passed over for promotion by those less suited to command. Seeking a major coup to push her case, she recruits Tonto, a low-level gofer and dealer for the Graingers as a grass. But when her plan is thwarted, Hadden seeks a deal with underworld fixer Dominic, a man who can keep secrets and exploit a chance to promote his own interests – but always extracts a price for his help.

Ritchie has a natural way of pulling the reader into the story. His characters, even the truly unlovely, are so realistic it is hard not to become emotionally involved.

The increasingly obvious involvement of Hadden eventually draws Grace Macallan into a savage game of violence and double-cross as she becomes sucked into a cat and mouse confrontation with both colleagues and criminals. Unless she can hold her nerve it is a situation that threatens her whole career.

If you like your crime thrillers filled with colourful characters, plenty of banter, laden with action, twists and turns galore and plenty of edge of your seat suspense, this noir tale is a complete no-brainer for you.

And if, like me, your vocabulary does not extend to Edinburgh street slang, don’t worry. Ritchie has provided a full glossary – and you’ll certainly appreciate the difference between Hibernian and Heart of Midlothian the next time you hear the Scottish football results!