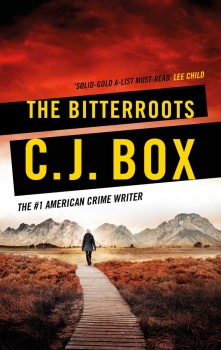 Private investigator Cassie Dewell is asked to check the evidence against a man accused of rape. She’s initially unsympathetic, but is surprised at what she uncovers.

This is the fourth book featuring Cassie Dewell, formerly a sheriff’s investigator, but after unreasonable treatment by her superiors in law enforcement now runs her own private firm. She is asked by the legal firm she works with to review the evidence against a client, Blake Kleinsasser, who is accused of the sexual assault of his niece. Blake comes across as brash and smug and Cassie is reluctant to take the case.

She is persuaded, however, and drives to north west Montana where the Kleinsasser family’s 80,000-acre ranch make them very influential. The ranch has been passed down through several generations of religious bigots in accordance with the dictates of the founding purchaser. As the oldest son, Blake was in line to inherit, but left for New York and has only recently returned, to the disgust of the rest of his family.

The circumstantial evidence against Blake is strong, but following the chain of evidence Cassie soon comes across some puzzling discrepancies. The local sheriff is less than co-operative, and she finds the people she wishes to interview are either not around or are hostile. Things go from bad to worse very quickly and it begins to look like Carrie needs to get out of town, fast.

Back at home friction between her mother, aging hippie Isabel, and her 14-year-old son Ben are adding stress. Ben is attracted to a new girl at school, who is suitably grateful when he saves her from being run down by an 18-wheeler truck. In occasional interludes, however, we read that the driver is in town for a purpose, and is lining up something at his old school which will give him revenge for his resentment about the treatment he received as a pupil there.

There is much to enjoy about CJ Box, and if you find the plot unappealing there is always an almost poetic depiction of the land and the wildlife in Montana or North Dakota. The detail about nutty religious sects and the number of guns wielded by your average citizen is amusing, as is the influence a determined family can bring to dictate what goes on in a sparsely populated rural county.

I have to say, however, that I found this book less enthralling than Box’s Joe Pickett stories or the earlier Carrie Dewell tales. The plot has few surprises, Carrie’s initial reluctance struck me as both unreasonable and unlikely and she seems a mite slow to appreciate the implications of her early discoveries. However, she comes across as both professional and feisty once she gets her teeth into the case, a strong woman who can handle herself up against tough ole mountain boys up to no good.