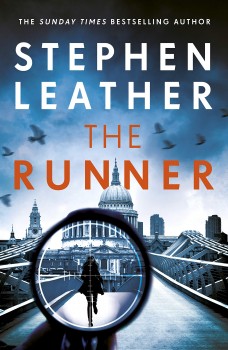 Sally Page runs for a hobby, and as her job for MI5 is only at the very bottom of the tree, nowhere near the front line, she never expected to have to run for her life. But when she comes back from a coffee run to find several of her colleagues dead, that’s exactly when she has to do.

Sally Page works for MI5, but her job isn’t all about high-powered spycraft. She works out of a bland-looking house in Wimbledon where she spends her days setting up and maintaining what is known in the trade as legends for other secret service officers – the fake identities that they are frequently called on to use as part of the jobs.

Sally orders on Amazon for them, uses Oyster cards to travel around London and checks on various safe houses dotted around the capital. The people who do her job are called footies, and often don’t stay in this type of work for very long, but Sally has been stuck in the same job for two years. She thinks it’s because she rebuffed her boss’s advances.

She starts every day with a run from her flat to work. She enjoys running and she’s good at it. She’s just never expected to have to run for her life when she comes back from an early morning coffee run to find several of her colleagues shot dead at their desks and an armed assailant still in the house.

That’s the start of a deadly game of cat and mouse played out in the parks and streets of London as Sally does her best to stay out of the hands of men who clearly want her dead. Stephen Leather’s always on safe ground when writing about the secret services in London and his books always carry a wealth of detail that speaks volumes about good research, insider sources or a combination of the two.

The body count in The Runner rises very fast as the pressure on Sally mounts and she desperately tries to find a safe haven. Whoever is after her knows a lot more that they should about her, which makes Sally suspect that someone in MI5 can’t be trusted, forcing her to sever ties with her employer rather than relying on them for help.

Sally has knowledge and skills that most people would lack in a situation like this, and she quickly proves herself to be both brave, resilient and resourceful. She’s not fazed by the armed pursuit and only allows herself a few flashes of breakdown when she gets a few moments to herself.

I liked the fact that this is set in the same framework as many of Leather’s other books, with guest appearances by Charlotte Button, now running an off the books black ops unit doing the kind of work the government can’t be seen to sanction. Major Allan Gannon also plays a part, heading the SAS team on permanent secondment to the capital. For anyone familiar with Leather’s other books, this gives a nice sense of the book being part of a richer whole, but no prior knowledge of the characters is needed.

The Runner is, as its title suggests, a chase thriller that grabbed my attention from the opening pages and never slackened its relentless pace. There’s a fair amount of ambiguity in the characters, particularly with the man who’s leading the hunt for Sally. He’s ex-SAS and working for the bad guys under duress, but that doesn’t make him any less dangerous. Marty Hirst might not like it, but he has a job to do, and he’s intending to carry out his orders.

The conclusion is as high-powered and explosive as I’ve come to expect from Leather, and this is another compelling military-grade thriller with characters both old and new, set in the murky world of British intelligence.