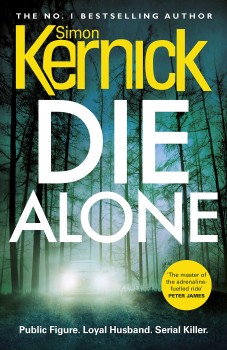 Disgraced copper Ray Mason didn’t ask to be broken out of prison. The people responsible want someone dead and they’ve decided that Mason is best placed to make that happen. The only problem is that the target is a candidate for the top job in British politics.

With the current state of UK politics in mind, it’s hard to conceive of anything much worse than the current crop stomping around in Westminster, but veteran thriller writer Simon Kernick neatly manages to top any of the current excesses with a wannabee prime ministerial candidate with a predilection for torturing and murdering young women, so look on the bright side, maybe things could be worse, after all.

Alistair Sheridan is rich, good looking, with the seemingly perfect family and the top job in his sights, but someone is determined to stop him and they’re even prepared to go so far as breaking disgraced copper Ray Mason out of prison to do the job for them. Mason has history with Sheridan, as he was part of a very nasty group of people who have been kidnapping, abusing and killing young women over a long period of time and it’s a case of the one that got away where Sheridan is concerned.

Mason isn’t keen on taking on the role of gun for hire, but he’s not keen on the idea of going back to prison, either. He has doubts about the people responsible for breaking him out, and isn’t convinced that they really are from the security services and when the job he’s been set up to do doesn’t go according to plan, he goes on the run. In a situation like this, there’s only one person Mason trusts and that’s his former colleague and lover, Tina Boyd, now a private investigator.

As ever, Kernick delivers a fast, hard-hitting thriller with a central character who has crossed a fair few lines in his time and in this book, he crosses a few more. With this author it’s always as well to be on the look-out for his stock-in-trade unreliable narrator trick, but this isn’t a device that gets over-used in Die Alone. Frankly, the book doesn’t need it. There’s plenty of tension without the need to ramp it up by the back door.

I like both Mason and Boyd as characters and in the previous book, which saw Mason effectively hand himself in on a charge of murder, I did wonder whether we’d finally seen the last of him. So I was pleased when I saw the identity of the main character in this latest offering and, as usual, Kernick doesn’t disappoint. For me, he’s one of the most reliable thriller writers in the genre.