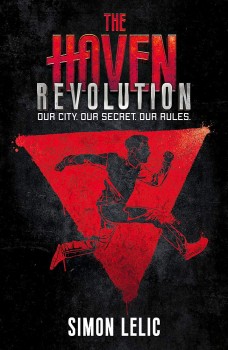 Pupils are going missing from an elite boarding school. Ollie Turner knows it’s a job for the kids of the underground community, the Haven, and that’s even before he knows quite how personal the connection is.

Ollie Turner is the reluctant leader of the Haven, an underground sanctuary for dispossessed kids where they can flourish away from the adults who have caused most of the problems that they are escaping from. Despite that, his status doesn’t mean that he can’t get his arse neatly handed to him on a plate in combat lessons with one of the younger kids.

Ollie knows he’s got a long way to go in some areas, but that doesn’t stop him trying, even when the jibes from Flea, a disappointed and disaffected candidate for the leadership, who wants nothing more than to mount a successful challenge to Ollie.

Jack is their computer genius, and when she discovers that her brother has gone missing from Forest Mount, an elite boarding school for children of the rich and powerful, she’s determined to do everything in her power to find him. Ollie, Jack and Lily, Flea’s sister, enrol undercover at Forest Mount, and start their investigations into the disappearance of Jack’s younger brother, Errol. In the course of their snooping, they uncover a treacherous plot that goes far, far beyond some missing schoolchildren.

I enjoyed the first encounter for this gutsy bunch of children and teenagers in The Haven, which saw them pitted against the formidable Maddy Sykes, who seemed to have a finger in every criminal pie. That fight led to the destruction of their previous sanctuary and the move to their large but insalubrious home in a long-abandoned tube station. Here, kids are getting sick on a regular basis and Ollie knows that finding a new home is a high priority, but with the need to find Jack’s brother, it’s not something he can do much about at the moment.

Simon Lelic has produced a large and convincing cast of kids, from jealous Flea, a scrappy street-fighter who wants nothing more than to take over from Ollie, to computer whiz and logistical genius Jack, who doesn’t let being confined to a wheelchair stand in the way of what she needs to do. These kids are tough, streetwise and very, very convincing. Forest Mount exerts a dark, malevolent presence over the story and makes it easy to believe the stories of the savage creature that haunts its grounds.  Imagine Mallory Towers taken over by a bunch of white supremacists and you won’t go far wrong.

There’s a sense of real danger suffusing the story, and a happy ending can never be assured. The inhabitants of the Haven are no strangers to loss, but they’re also fighters, and even against the odds, they never give up, not even when something from the past comes back to haunt them. I was cheering from them all the way and there are some genuinely heart-in-mouth moments.

The Haven has taken on a life of its own now, and easily stands beside Robert Muchamore’s CHERUB series without in any way being in its shadow. I hope Lelic and his publishers are in there for the long haul, as I certainly am.