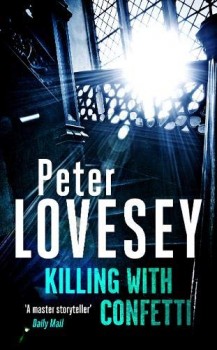 When the son of the county’s Deputy Chief Constable marries the daughter of a gang boss, Superintendent Peter Diamond, head of Bath CID, is assigned to make sure no criminal rivals can threaten the life of the bride’s father

Comedy and science fiction writer Douglas Adams’ advice, delivered by his ‘holistic detective’ Dirk Gently to ‘think the unthinkable’, made me think that it’s time that Superintendent Peter Diamond, head of Bath CID, retired after 17 novels and almost three decades of crime fighting.

Killing With Confetti is hardly among the best of former CWA chairman and multi-award winner Peter Lovesey’s numerous books, not a patch for example on its scintillating predecessor Beau Death and one of his weakest for a long time. It simply doesn’t take off. Despite a terrific premise for a plot, the characters seem stereotypical and tired, drawn without Lovesey’s usual skill and sympathy. It’s long-winded and much of the humour which normally enlivens and peppers the Diamond stories, feels very flat.

Using a device he has successfully employed before, the author does not even introduce Diamond until half-way through the story. It begins with an abortive mass prison break. thwarted largely by the courage of a female governor. This forms the foundation for all that follows.

Years later a young man proposes to his long-term, live-in girlfriend. She is unwilling to accept, because unknown to her suitor, she is the daughter of a West Country crime baron, close to the end of his current prison sentence. The boy’s father is the fast-rising, career-obsessed and deeply ambitious Deputy Chief Constable of Avon & Somerset. But the lad appeals to his influential, manipulative and social-climbing mother and they convince him to go ahead despite the risk to his career.

At the instigation of the bride-to-be’s father, rich from the proceeds of crime, they plan the wedding of the year in Bath’s magnificent Abbey. But such a public event means gang rivals will be given the chance to settle old scores and expand their own influence if they can somehow organise his death.

Diamond is appalled to be put in charge of security. He’s ordered to be discreet, unwillingly packs a gun with a guest list – and must somehow cope with potential killers, warring parents, bossy photographers and straying bridesmaids.

When underworld rumours suggest an assassination attempt, panic reigns among the police top brass. Diamond, an old-style policeman, some might even say curmudgeonly, sticks to the established methods. He is, as always, grouchy, quick to bark, yet intelligent enough to accept ideas and fiercely defensive of his team. He is fully aware of the pitfalls and dangers with the venue offering the potential for infinite hiding places for an assassination attempt.

This is where it all gets a big fluffy with lots of nonsensical chatter from relatives, tiny-but-wild bridesmaids and their not-so-tiny-but-wanting-to-be-wild mothers, and plenty of description of unproductive police work. It feels as if the story is developed from something Lovesey imagined some time ago, padded out considerably.

The conclusion, a Poirot-style re-enactment, described by one character as like ‘being in the last chapter of an old-fashioned detective story’, is positively weak and the final action quite unbelievable, more suited to an American comic strip.

Lovesey’s usual mocking treatment of Bath’s pompous glitterati and professional classes do much to offset other failings, but for once, his pitting of the trilby-wearing, near out-dated Diamond against the more up-to-date, violent and dark plot that keeps trying to break out, just doesn’t work8