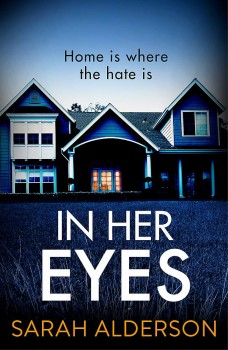 It isn’t the first time June’s life has hung in the balance. But this time it’s not cancer killing her. It’s a bullet.

To the casual passer-by, Ava’s life is perfect, and her family is charmed. But underneath the money and the beautiful house nestled in the foothills of the Topa Topa mountains in California the truth festers, waiting for one thing to expose it: that happiness always hangs by a thread. Ava’s weed-smoking stepson, Gene, is a layabout, her older daughter, Hannah, is increasingly distant, her husband, Robert, spends way too much time locked in his study and her younger daughter, June, has recently spent four years fighting cancer.
Then a home invasion cuts that happiness thread and spins Ava’s life into a devastating maelstrom, leaving Robert and her injured, and June in a coma fighting for her life. Ava remembers virtually nothing of the events surrounding the attack. But as she searches for answers, doubts and the horrific reality about the family finances begin filling in the gaps in her mind about what really happened that night. And the truth may be just the thing she doesn’t want to learn.
I was looking for escapism. Alderson delivered it in this knotty domestic suspense story. In bulk. Despite what I am about to write, I thoroughly enjoyed reading this novel, and did so in one sitting. Ava is a bit too naively blind, and often quite unconvincing in her behaviour. That, combined with certain events that were highly questionable, verging on far-fetched, really did have my suspension of disbelief needing a huge amount of repair work.
However, Ava, despite straying from the straight and narrow, has her redeeming features; she has claws and uses them. She can take care of herself, even when danger threatens to overwhelm. She fights back, which makes me like her. Although the other characters were less, and in places unequally developed, the younger ones were believable. The men were a bit glaringly obvious.
This first-person, present tense story shines, thanks to the simple, relatively succinct writing. It is easy to walk by Ava’s side on her journey. And although the sense of time and place is secondary, and even though this feels like an English writer setting her story in the USA, I had a keen sense of being involved and invested.
There are so many twists that it feels like overkill in the end. It’s definitely a case of less would be more. But the voice inside my head that was begging for escapism told my cynical brain to get over itself and enjoy the ride. So it did.
The pacing starts at a steady gallop and does not let up for a moment. The sense of continuous acceleration towards increasingly dark streets makes it almost impossible to put the book down. Which is why the ending shocked and disappointed me. The ‘almost ending’ was great if slightly anticipated, but then Alderson had to throw in one twist more and made the denouement fall apart in a spaghetti of coincidences, conveniences and an unbelievable additional culprit with an equally unconvincing raison d’être.
That said, I enjoyed the rest of the book sufficiently that I am looking forward to my next adventure with this author.