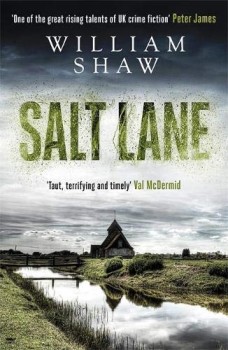 DS Alexandra Cupidi is about to learn that the Kentish Fens offer more than quiet and seclusion after the tumultuous Met. They are the almost perfect hiding place for bodies.

Julian Keen gets the shock of his life when a down-and-out woman turns up on his London doorstep. She claims to be his mother; the one he believed to have died before he even started school. Despite his misgivings and his wife’s antipathy, Julian lets the woman stay the night, only to find she has disappeared the next morning.
DS Alexandra Cupidi is more than conscientious, but not the most popular detective in Kent. Brusque and slightly north of cold, she antagonises her colleagues, even her hardworking partner, Constable Jill Ferriter. And she is not about to start feeling happy any time soon, because her transition from London to Dungeness is not all roses. She and her daughter Zoe, who is still angry about Alexandra’s now-dead affair, are walking on eggshells.
But Alexandra won’t have much time to sort out her family life. A woman’s body has been found in the fens. She has been in the water for a couple of weeks. Luckily though, after a TV appeal, the Jane Doe soon has a name. But something is definitely not right, as she is Julian Keen’s mother, who was alive and sleeping in his spare room in London the night before.
And now Alexandra’s conscientiousness could be her undoing, as more bodies turn up. It could even be the death of her.
Police procedurals can be repetitive. They need excellent characters to lift them above the crowd, especially as new and unique plots are thin on the ground. I am pleased to say that William Shaw has created an excellent character in Alexandra Cupidi, and a vibrant sidekick in her partner, Jill Ferriter (despite the surnames, which annoyed and amused me in equal measures). Their conversations are as wonderfully lacking in communication as the best of Victoria Wood’s interchanges between her characters. And it is utterly refreshing to read for once, conflictual dialogue that replaces straight-forward question-and-answer. For that alone, I can’t wait for the next book in this series.
The plot ties together incidents in recent history with current events, stretching between the moral concerns of the 1990s and the horrific plight and abuse of today’s illegal immigrants. The conflicting opinions running through the book beautifully mirror the social and political undercurrent in Britain, and all that is nasty festering under its thin skin of normality. Although I did have trouble believing the tenuous connection between one of the victims and the mastermind criminal, it neatly sews the two together into a sadly credible story.
In places it seemed as if there was a plethora of characters. But the author manages to make them sufficiently singular in dialogue so that they remain distinguishable. The setting is beautifully described and breathes atmosphere into an already strong novel.
I had guessed whodunit relatively early on, but it did not diminish the pleasure I took from a story where the reader needs a robust pair of walking shoes – it rattles along at a strong pace, thanks to a good balance of action, introspection and dialogue, along with a well-edited writing style.