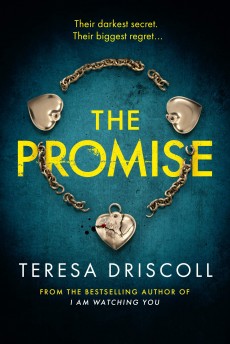 The Promise is one that they have kept for more than 30 years, but Beth and her friends know it is about to be unburied. And they all have too much to lose.

Beth, Sally and Carol were only 14 when the dark secret formed deep in the walls of the convent. Now, even though it hovers ceaselessly on the edge of their conscience, they are still certain the truth must never become known. But the convent has been sold and developers are about to move in with diggers. Soon, the world will know of the horrors and the girls’ sins.
They need to think and move fast. But Carol may as well have fallen off the planet. Even though Beth and Sally think she could still be somewhere in France, tracking her down has proved impossible. In desperation, they employ a former policeman, Plymouth PI Matthew Hill, to help them find their estranged friend.
Matthew is certain that Beth and Sally are not being entirely honest when they tell him they want to hook up with Carol to attend the goodbye to their Catholic school reunion. Equally so, Beth soon regrets taking on the increasingly strange PI. But time is running out. And so is someone’s patience.
This is a story that spans timelines and is written from multiple points of view: Beth, Carol and Matthew. Some is in the past tense, but the majority (Beth’s point of view) is in the first-person present tense. And Carol’s is in the form of diary entries. So it should be a book that draws the reader in. But the behaviour and introspections of the main characters are decidedly juvenile, wimpy and questionable, leaving me wanting to slap Beth, Sally and Matthew, and leaving me unmoved about Carol. Using chapters in Matthew’s point of view adds no value to the story. In some ways, it further dilutes the already weak tension. That Carol would keep a diary, I find incredible.
The prologue promises suspense, mystery, darkness, and it hooked me in. Unfortunately, had I really been paying attention, it also cheats and warns that the denouement will disappoint. It is impossible to cite those warnings without giving the entire story away. Suffice to say, the protagonists clearly never grow emotionally. Sadly, the major reveal comes relatively early in the story, and is such an anti-climax that I felt little investment in the last third of the book.
I would like to say this is an interesting study of how childhood secrets carve and mould their carriers, often with terrible consequences that affect the rest of their lives. But I just could not believe that not one of the three now-women could have not looked at their sin through adult or even just objective eyes – particularly Beth, who the author is portraying as a woman with responsibilities and a career.
There are hints of sharp writing, but the erratic pacing and fragile storyline that unfolds counter this, leaving the reader holding a bland domestic noir rather than the promised psychological thriller. The author does throw in a couple of twists to bolster the second half of the story, but of these two curveballs, one is too obvious and the other is just an unnecessary shock-out (a tasteless cop-out in the absence of a meaty plot). The Promise is a fast, effortless read, but I ended the book with a feeling of disappointment.