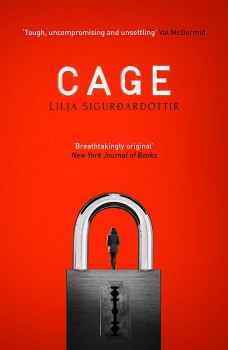 In Iceland Agla’s prison sentence for financial crimes is coming to an end while her former nemesis Maria gets drawn into helping her to pull another international money fraud.

Snare introduced Lilja Sigurðardóttir’s sparkly, intelligent and sexy writing style. Trap confirmed her position as a confident writer unafraid to touch diverse themes. Cage is the crowning glory of the Reykjavik Noir trilogy: riveting, intriguing, audacious and fun.
In the final instalment, the author continues with the story of the two main heroines Sonja and Agla, but gives more prominence to other female characters presented in earlier books. You could read Cage as a standalone and get to grips with the complicated background that has shaped strong personalities and their surroundings. However, it would be much more exciting to start from the very beginning to understand the shifting circumstances and tension which never eases up.
Several years has passed since the on-off turbulent relationship between Agla and Sonja, both embroiled in big money schemes. Agla’s time in prison for financial misconduct is nearing its end, and she cannot wait to start her free life once more; still devastated after Sonja’s rejection yet hopeful for some personal happiness.
Although her professional life lies in tatters, Agla is still at the top of her intellectual game, her mind never resting, so when a group of foreign businessmen tries to draw her into an ingenious international fraud, she takes the bait, and with her former nemesis Maria launches into a clever scheme that could make her a very rich woman again.
Maria, who used to work for the public prosecutor, runs an independent online investigative magazine, The Squirrel, now and wants to prove herself. She’s both disgusted and fascinated by Agla, but nevertheless follows her orders to search for various contacts and finds herself in the centre of a very dangerous network stretching across the globe, involving Ingimar, a very ruthless entrepreneur, who is protecting own interests on the Icelandic soil.
Meanwhile, Sonja runs her own drug empire from the secure base in London, constantly watching her own back, until a deadly threat brings her to Iceland. She has also changed, mostly because of being in the centre of criminal events, and will stop at nothing to protect her son Tomas. Settling scores with longstanding rivals and evaluating her future will be tough and necessary, and unavoidable, especially when meeting Agla.
There is so much going in Sigurðardóttir’s novels that only a writer of her calibre could seamlessly weave together drug-smuggling, financial crime and politics, and balance these big topics with murder, love and betrayal as the most basic human emotions still seem to be the most powerful drivers.
Intricate plotting and layered characterisation make Cage authentic and immensely rich. The structure is so taut and sharp but opens the doors to extra subplots, adding new levels of interest to the story and creating drama within already complex connections. On a slightly personal note I enjoyed seeing a prison guard named Ewa being efficient and human amongst the financial sharks and drug-influenced baddies!
Kudos to the translator extraordinaire Quentin Bates who yet again brings life and emotion to the English version of the novel.