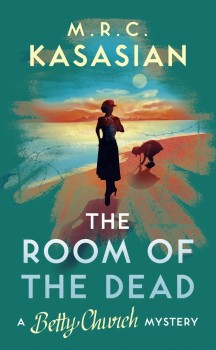 The Room of the Dead

Inspector Betty Church finds wartime life in her sleepy hometown of Sackwater hard to bear until a bombing raid and the discovery of a body on the beach put her on the trail of a killer.

In this second story of MRC Kasasian’s part-disabled heroine Inspector Betty Church it becomes increasingly obvious why for many years the Met police referred to their county colleagues as the Swedey, Carrot Crunchers or simply Strawheads!

The station at Sackwater is staffed by the unwanted sweepings of almost every constabulary. But if at first glance some of his characters appear little more than caricatures, readers will soon realise that like Dickens and Shakespeare Kasasian uses their comedic natures to throw the tragedy which follows into sharp relief.

Middleton, now, when she chooses to be, an ‘ailing’ pensioner, reappears as her god-daughter, former Met Sergeant Betty Church, now a Suffolk inspector following the redoubtable Middleton’s intervention to save her career after she lost part of her arm in an as yet unexplained ‘mishap’, battles phoney war hysteria, institutional incompetence – and a cold-blooded killer.

The inept, idle and incompetent guardians of the law in the crumbling seaside town of Sackwater – where Church grew up and which has never seen a policewoman, let alone one of rank – could double as the cast of Carry On Copper!

All the main characters return. The World War I hero Superintendent trying to deal with his PTSD by obsessing over his garden; the unpleasant and misogynist fellow Inspector; a sickeningly sweet and childish WPC who Church is determined to force into adulthood; the tea-swilling long-service desk sergeant; the hypochondriac; a wimpish and effeminate pair of twins; the would-be Romeo who thinks ‘hands on’ policing’ means his hands on any available woman; and the just plain thick! Imagine the fun Kasasian has had trying to dream up their ever-increasing levels of stupidity!

After the excitement of the Suffolk Vampire case, Sackwater has lapsed back into slumberous inefficiency with Betty Church desperate for some real action and police work rather than imagined German paratroopers. A bomb on a residential street, a dead body on the beach, and a rash of missing people puts paid to her boredom as she must concentrate on finding an enemy closer to home.

Church is an inspired creation very much of her time. Doubly handicapped as a woman in a male environment and only having part of one arm, she knows that without the war she wouldn’t still be in the police, let alone an inspector. To offset this, she runs a tight ship and keeps her incompetent crew in awe, if not actually frightened of her.

There are, however, a few problems of factual inaccuracies. How anyone outside the nascent Ministry of Aircraft Production could have even named, let alone used a chart, to identify a Lancaster in early 1940 when the first machine did not fly until the following year, is matched by the nonsense about a local anti-aircraft site shooting down a ‘battle bomber and all its crew’ – presumably a Fairey Battle light bomber with its crew of three! Even the lone Gloster Gladiator on the penultimate page is stretching imagination – the only RAF operational squadron at the time was based in Devon, some way from the Suffolk coast!

The story is a clever and beautifully written tale of small-town wartime life with a good mystery – and a most unusual solution. Church’s first-person narration suits both the plot and her strong, confident and witty character as it allows the reader insight into how her mind works while maintaining the suspense.

The Room of the Dead is funny, amusing and surprising, and it will keep you guessing at a darker and more unnerving story.  Frequently on the verge of slapstick, Kasasian always drags the reader back to the central business of murder, no matter how many false leads.

There has always been more than a touch of Christie in his work, but with more realism and a better sense of place and time. This fine follow-up looks set to enhance his reputation.