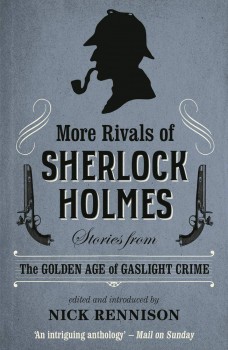 Fifteen of the rivals of the great Sherlock Holmes – police officers, PIs and eccentric criminologists – who all had their day in the sun in the popular magazines around the turn of the century.

It is undoubtedly true there never has been a detective quite like Arthur Conan Doyle’s supremely rational and intellectual yet self-tortured drug addicted hero. Together with his dependable companion, Dr John Watson, Sherlock Holmes will forever epitomise the gaslit, smog-filled streets of late 19th and early 20th-century London – and this intriguing new collection shows how far he stood above the rest.

Nick Rennison, a Sunday Times reviewer, who doubles as editor and bookseller, has a particular interest in crime fiction and the Victorian era. Combining both in his Bloomsbury Good Reading Guide to Crime Fiction, 100 Must-Read Crime Novels and Sherlock Holmes: An Unauthorised Biography has lead to an examination of the great detective’s many imitators and rivals – a small army of police, PIs and eccentric criminologists who all enjoyed their day in the sun in the popular magazine boom of the period leading up to World War I.

Holmes sparked an international demand for crime stories, filled by the explosion of cheap popular magazines, the most significant of which was The Strand, which in 1891 published the first of the Holmes’ short stories A Scandal In Bohemia and was to go on to serialise all but two of Conan Doyle’s Holmes books.

Dozens of other similar publications such as The Windsor Magazine, The Idler – edited for a while by Jerome ‘Three Men In A Boat’ K Jerome – The Pall Mall Magazine and Pearsons provided outlets, as did the American pulps, for would-be rivals, among whom were some now famous names such as the Hungarian Baroness Orczy, best remembered for The Scarlet Pimpernel, EW Hornung with his gentleman thief Raffles, R Austin Freeman and Arthur Morrison who debuted in The Strand in 1894 after Conan Doyle had killed off Holmes in The Final Problem.

Also featured in this book is Doyle’s friend and part collaborator Bernard Fletcher Robinson – who also worked with PG Wodehouse before his untimely death at the age of just 36. Robinson is credited with introducing Doyle to the Devon legends which formed the basis of his most famous Holmes story The Hound Of the Baskervilles. Here he is represented by his Addington Peare, an astute policeman with his own Watson in the shape of the artist Phillips, in The Vanished Millionaire, a fine example of an Edwardian crime mystery.

Rennison has been at pains not to feature authors such as GK Chesterton or Jacques Futrelle, both of whom had major roles in the first Rivals. The only writer to reappear is Headon Hill whose clever The Divination Of The Kodak Films features ‘Confidential Adviser’ Mark Poignard and his own, surprisingly for the times, wise and intuitive Hindoo adviser, the wizened fakir Kala Persad.

Not all the 15 stories featured here reach great heights. Some, David Christie Murray’s John Pym for example, are little more than none-too-clever copies of Holmes. Some stretch imagination too far. Ernest Bramah’s – he is best remembered for his 1907 science fiction novel What Might Have Been, said to be the inspiration for Orwell’s 1984 – blind detective Max Carrados, who can read fine print by touch and is a deadly shot, is one, although well written.

All in all, this is a fascinating look at a vibrant and informative picture of a period in crime fiction history that was both productive and rich. Students of the genre will welcome Rennison’s latest venture and perhaps the uncommitted will be drawn to some of the featured authors, many of whom deserved to be remembered and to be more widely read today.