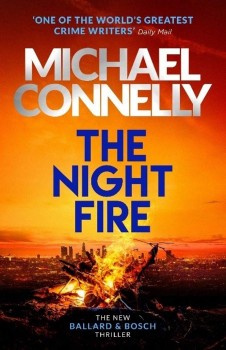 When a cold case lands in Harry Bosch’s lap, he needs the help of night shift detective Renée Ballard again as the two look into an unsolved murder from 20 years ago.

US police thriller writer Michael Connelly again teams up one of the longest running cop-turned-investigators in the business with a relative rookie on the police scene.

Harry Bosch needs little introduction to anyone whose criminal interests lead them over to the other side of the Pond, and even someone like me who came relatively late to the series didn’t find it hard to spot his appeal. He’s tough, street-smart and always on the side of the angels, even now that he’s mostly working on the outside rather than on the inside.

Renée Ballard works the night shift - known as the Late Show - for the LAPD. She picks up the cases that come in overnight. In this instance, the case is that of a homeless man burned to death in his tent.

Bosch is currently working as an investigator with his half-brother, lawyer Micky Haller, and it’s not work that puts him in the good books of his former colleagues, especially not when it looks like Haller is going to have another acquittal on his hands, this time the person accused of murdering a well-known judge. The cops are certain they’ve got the right man, but with help from Bosch, it looks like Haller is about to punch a large hole in the prosecution’s case.

What brings Bosch and Ballard together this time is an old ‘murder book’, cop-speak for a case file, found amongst the possessions of an old friend and mentor of Bosch’s. What Bosch can’t work out is why the book was not handed back to the police department years ago, as nothing seems to have progressed on the case file in over 20 years.

The case concerns the unsolved killing of a young man in an alley known for use in drug deals. Bosch doesn’t know why his old friend still had the murder book, but he wants to find out, and to do that he needs help from someone on this inside, and to get that he needs Ballard on board.

Pairing up a veteran character with a relative newcomer could be a risky strategy, potentially leaving the new kid on the block left out in the cold but it’s a testament to the strength of Ballard as a character that the partnership of old and news comes over as on an equal footing. For anyone coming new to the books, there’s a freshness that’s sometimes lost in long-running series, and Ballard provides a gender balance that’s all too often lacking in US cop thrillers. The clearly signposted chapters alternate between the two of them, pushing the story along rapidly in each point of view.

Connelly has a detailed, descriptive style, but despite that the pace doesn’t flag and the books never feel overloaded with detail. The storylines are complex but never convoluted and the dialogue remains as sharp as ever.

If you’re already a Harry Bosch fan, you certainly won’t be disappointed and if you’re not, I’d recommend diving straight in. There’s no backstory overload, as Connelly has a light hand and there’s just enough to set the scene and establish the characters in this clever, complex police thriller. Oh, and if you’re like me where animals in crime fiction are concerned, you’ll be pleased to know that there’s nothing to worry about!