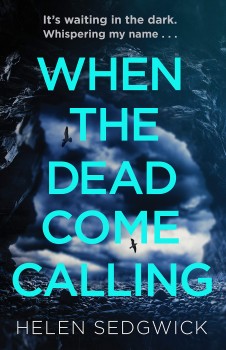 When the Dead Come Calling

The murder of a psychotherapist sends a northern village into shock and piles the pressure on resident DI Georgie Strachan.

DI Georgie Strachan’s work as a copper in the small northern village of Burrowhead isn’t usually too stressful, and in general, that’s how she prefers things. That changes radically when a local psychotherapist is found murdered in a children’s playground, thrusting Georgie and her colleagues into the limelight and upping their pace of life dramatically.

The death of Alexis Cosse is only the start of Georgie’s problems. Suddenly, Burrowhead doesn’t seem like the safe haven Georgie had hoped that it would be for her and her husband Fergus.

When the Dead Come Calling gets off to an atmospherically creepy start with a first chapter told from the point of view of someone hiding in a cave on the coast, looking around at old graffiti and carvings on the wall. Names, pleas for help, maybe religious, maybe physical, maybe a combination of both. The cave sets the scene for later in the book and can be read as a metaphor for the darkness wrapping itself around the once sleepy, untaxing village, as well as being a very real brooding presence in the story. I tried to work out its place in the story, but then simply went with the flow as the tension ramped up in the village.

I like Georgie as a main character but found that this was one of the rare cases in a police procedural that I wanted to know more about a character’s backstory rather than less. It’s clear early on that things at home aren’t too easy for her as her husband, Fergus – a somewhat fey, detached man – isn’t the easiest of people to live with as he seems to be in a world of his own a lot of the time and struggles with mental health difficulties that seem to have been a contributory factor in Georgie wanting a quieter life.

Burrowhead is something of an enigma as well, and I never succeeded in placing it geographically. Sometimes I thought it was in Scotland, sometimes south of the border. I would have preferred the setting to be more explicit, as wondering where the village was became something of a distraction, and left me crying out for a few signposts to help me out.

That aside, Helen Sedgwick weaves a clever combination of psychological suspense and low-key police procedural. I liked her insights into village policing, from spiky sidekick copper Trish, to their colleague Simon, who’d had hopes of becoming something more than just good friends with the murdered man. The villagers are an interesting bunch as well, struggling with racial attacks, homophobia and the sort of unpleasantness that is more often associated with inner cities but which in fact are just as much a rural problem as they are a town and a city issue.

When the Dead Come Calling looks to be the start of a series and, on this showing, I’ll be happy to visit Burrowhead again, but I would definitely like a roadmap to make sure I end up in the right place!