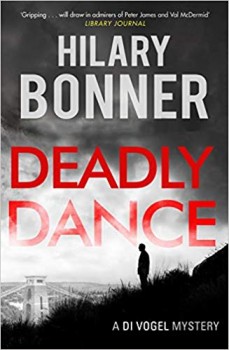 A killer has preyed on a 14-year-old girl in Bristol. At first it seems an easy case for DI David Vogel and his team, but then doubts creep in.

I’m always happy to pick up a book set in my adopted city of Bristol, so when I saw in the blurb for Deadly Dance by Somerset author Hilary Bonner that a murder takes place here, the book promptly found its way onto my tottering To Be Read pile.

DI David Vogel is first on the scene when a young girl’s body is discovered in one of Bristol’s more problematic areas, generally known as a red-light district where prostitutes will ply their trade, generally untroubled by the local coppers. But a murder is a very different game, and when the victim turns out to be only 14, Vogel’s bosses want a quick resolution to the case, and they aren’t the only ones. The dead girl, Melanie Cooke, has affected Vogel deeply, and he’s determined to catch her killer.

Melanie’s parents are separated and, as ever, the first place the police look is close to home, putting both her father and her stepfather under the spotlight. Both seem equally distraught at the girl’s death, but Vogel and his team don’t know who to believe. Her mother, Sarah Fisher, is adamant that her husband Jim would not have hurt Melanie and her father’s new wife, Susan Cooke is equally certain that her Terry worshipped his daughter and would equally never have hurt his daughter. But as Susan shows some signs of domestic violence, Vogel and his team aren’t convinced.

The story is told in alternating chapters from the points of view of David Vogel and his team, interspersed with chapters under the names of Saul, Leo and Al, each clearly a very different character. I didn’t warm to any of the three named chapter characters. Saul wants a wife to have his children and is trawling dating sites for a woman he thinks will be suitably compliant. Leo is gay and very deeply closeted. He doesn’t want any revelations about his private life to impact on his work. Al is utterly repellent. He thinks little girls dress and act provocatively, and he enjoys spying on them, and even getting close to the school gates wherever possible.

At first, it wasn’t clear what the relevance of each of the three men was going to be, but then the storylines gradually converged, and the chilling hints started to crystallise, but despite that, the final reveal when it came was a leftfield ball that caught me right in the guts.

In the background, Vogel has his own personal angst to contend with – after all, no senior copper is allowed out without a heavy bag of emotional debris. In Vogel’s case, it’s family secrets that threaten his Jewish identity and strain his relationship with his long-suffering wife who seems to be there to act as a sounding board when he needs to take his concerns out of the office. She comes over as more of a plot device than a character, and I would also have liked the supporting cast of coppers to stand out a bit more.

Bonner serves up an intriguing, multi-layered police procedural, set against the backdrop of Bristol. The city never quite came alive, but overall, the book lived up to its early promise and everything certainly comes together with a bang in the closing chapters. There are some clever moves that left me trailing some distance behind, wondering how the hell something had been done. I was baffled, and thoroughly enjoyed feeling like that. Yes, maybe there’s an element of cheating, but I don’t think crime fans expect to have it all their own way in a book. I know I certainly don’t.