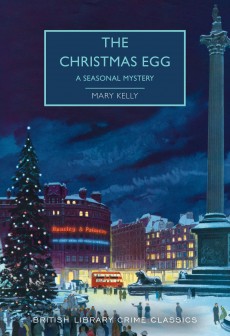 In a seedy Islington bedsit the body of Princess Olga Karukhin lies as if in state. Her secret trunk has  been wrenched open and its precious contents gone …

This British Library Crime Classic was first published in 1958. It's an odd little slice of the 1950s underworld which has at its heart a princess, an emigre from Czarist Russia, living in genteel poverty in smog-bound London with a glittering collection of treasures tucked under her single bed.

The action takes place over three days – December 23, December 24 and Christmas Eve. Princess Olga Karukhin is discovered dead on her bed, her jewels are missing and so is Ivan, her downtrodden alcoholic grandson. Enter Chief Inspector Brett Nightingale and Sergeant Beddoes. Their search for the missing loot and those responsible for its disappearance takes them from the shady public houses of Islington to the high-class retailers of Hatton Garden.

Aided by the plutocratic dealer Mr Majendie, (which side of the fence is he on?) and his lovely blonde assistant Stephanie (described as 'crackling' by Sergeant Beddoes in true 1950s style), this fast-moving chase takes us into the snow-covered Kent countryside for a thrilling denouement just this side of Christmas – complete with helicopter!

The style of Mary Kelly's writing hasn't dated. The tightly paced plotting and quick-fire dialogue reminded me of the hard-boiled American detective dramas of the 1940s. Kelly herself is something of a mystery. She was hailed as one of the most talented British novelists to write crime fiction in the post-war period, but abandoned the genre after publishing a mere ten books over 18 years.

Her Inspector Brett is an interesting but underdeveloped character. She gives us no physical description of him, but I imagine him lantern-jawed and shiny with Brylcreem!  He has an opera-singing wife and a liking for the young ladies (Stephanie!) but she chooses to kill him off in a subsequent story.

There are no elaborate puzzles or plot twists here - just a matter-of-fact, almost documentary style, telling of the tale. But if you fancy reading a well-written, polished and intelligent period piece during the festivities then this could be the one for your Christmas stocking.