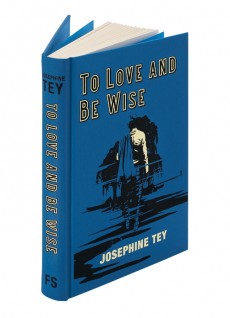 To Love and Be Wise

The impossibly good-looking Leslie Searle inveigles his way into the life of a wealthy and artistic family, and then he goes missing. DI Alan Grant is called in to determine if he has been murdered and by whom.

Detective Inspector Alan Grant arrives at a society party to meet his dear friend, the celebrity Marta Hallard. He immediately meets an incredibly beautiful blond young man who is seeking to meet a mutual acquaintance, the radio broadcaster Walter Whitmore, and so the inspector facilitates the meeting.

This results in Searle being invited to stay in the family’s country house where he meets Liz, Walter’s fiancée. The village in which the family live has been colonised by a cast of theatrical and artistic types, all with larger than life personalities.

Searle has a large impact on everyone he meets. His good looks and his personality seem to draw everyone’s attention. Mostly he is admired and courted but there are those who are bitter because they fail to get his attention or who are suspicious of his apparently effortless charm. Searle is a significant professional photographer taking photographs of many famous celebrities. He and Walter embark on a project together and during this Searle goes missing, possibly drowned in the local river, after a row with Walter.

Inspector Grant is called in to investigate and in doing so we are drawn into a greater understanding of the diverse cast of unusual characters who live in this country village.

This book was first published in 1950 and it sustains tremendous charm. It is very mannered and redolent of the attitudes and idiosyncrasies of its time. However, it deftly touches on, without ever making them explicit, many taboos and social issues of which one did not speak at the time. The denouement is very much one that may be expected in a more modern novel but was a real surprise in this period piece.

Oddly, the characters are very real, vivid and clear, while also having something of the air of black and white movies of the 1950s. Conversations are also mannered but nonetheless candid and timeless. I found it very easy to form alliances, likings and distrust of the characters who are described with minimum effort but maximum effect.

The atmosphere of the story is caught perfectly in this beautiful Folio Society edition by Mark Smith’s exceptional illustrations.