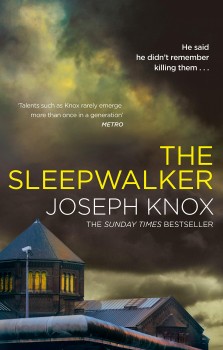 Aidan hears the mass murderer’s final words. But they are not the long-awaited location of his final victim. Far from it.

The Sleepwalker, the label given to Martin Wick by the tabloid press, is dying of cancer. He has escaped Strangeways, but only to end his days in the Manchester hospital bed, surrounded by police who are only interested in one thing – where they can find his final victim.
But Martin, whose decade-long imprisonment came from his confession, even though he said he didn’t remember killing his victims, and even though he later retracted his admission, is about to become a murder victim in his own right. Someone attacks him, leaving him for dead, along with a police officer. And another one who is now fighting for his life.
Aidan Waits is the one who hears Martin’s final words, and as is the detective’s wont, he embarks on a dark and solitary journey to find the truth. But there is a contract killer on his tail, and his very life is on the line.
I closed this book with one thought; don’t do this to me! You’ll need to read the book to find out why.
This is the third book in the Manchester-based Aidan Waits series. And I was the lucky one who reviewed the author’s debut book (and first in this series), Sirens. Joseph Knox has grown in author strength. His first book was good, despite one or two pokes at my suspension of disbelief about a drinker and user protagonist being given a relatively free rein to solve crime in the dangerous underbelly of Manchester.
But I have swallowed this hiccup and become increasingly attached to Aidan, with all his convincing flaws and beautifully honed point of view. That it is written in the first person, gives the reader an intimate proximity to the protagonist. For me, it was an increasingly intense journey with someone who feels real and heartbreakingly damaged. It is rare I become so invested in a detective, but Aidan is one of those rarities.
Knox keeps his readers on board with the sheer quality of writing and excellent balance of action, introspection and epigrammatic dialogue. Chapters are reasonably short, adding to the heady pacing of this novel.
The author creates vibrant dynamics between three-dimensional characters. None of the main players slips between his fingers; the author treats them all with attention and pumps blood into their veins with scant but relevant detail. Manchester, through the eyes of Knox, is as much a character as the two-legged ones that leap from the pages.
Reading the first two books in this series is not essential but do it anyway. Not just because Waits’ backstory, though potentially stereotyped, is relevant and interesting. Quite simply, this author is Michelin-starred. And if you like your crime fiction dark and want to crawl into the mind of damaged people, this series is an absolute must. This third novel in the series stayed with me for days afterwards. This is unheard of for me and is a testament to an outstanding book.