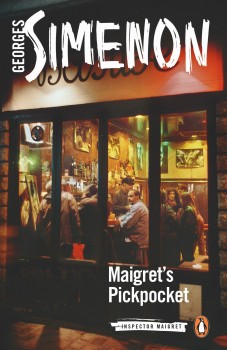 Maigret’s wallet is stolen but then returned to him, with nothing missing. The detective is intrigued when a mysterious man admits to the theft.

It is a lovely morning in early spring and Maigret is on his way to work. He feels himself lucky to have managed to catch one of the older types of bus – one with a rear platform on which he can stand and smoke his pipe. He feels a little less happy with the world when, having got off the bus, he finds that his pocket has been picked and his wallet stolen.

On the following day the wallet is returned to him by post, its contents complete. There is no indication of who sent it but, not long afterwards, Maigret receives a telephone call from a man who refuses to give his name but claims that it was he who stole and then returned the wallet. He is clearly very nervous and keeps insisting that he is innocent and that Maigret should not judge him until they have met.

Maigret agrees to do so and they arrange to meet at a bar called Le Metro. When they begin to talk Maigret finds a young man who appears to be even more nervous than he had been on the phone. He isn't convinced that Maigret has come alone, as they had agreed, and continues to claim that he is guilty of nothing except the theft of the wallet.

Eventually, he persuades Maigret to accompany him to his flat and asks him to open a door to what turns out to be a bedroom. When he does so he is instantly aware of a very unpleasant smell, in spite of the open window, and on the floor, next to the bed, surrounded by a multitude of bluebottles, lies the body of a young woman. She had been shot in the head.

Maigret immediately rings the Quai des Orfèvres, informs them of the situation and then takes the young man, now almost at the end of his tether, outside. It is noticeable that, although he talks to him, it is not so much an interview as a legitimate attempt to get a few more facts from him.

It turns out that his name is François Ricain and the dead woman is his wife, Sophie. He is a freelance journalist, as well as a writer of screenplays and an assistant film director. It seems, however, that none of these activities provides him with anything like a living wage and he is constantly short of money.

Eventually, Maigret manages to calm him sufficiently to take him to a restaurant where he hears Ricain's account of what happened on the evening of the murder. It seemed that he had gone in search of a friend – a minor film producer called Carus – hoping to borrow two thousand francs. The money was needed urgently because he was behind with his rent and had been threatened with eviction. However, he had been unable to find him and eventually had returned to the flat about 4am to find his wife dead.

It doesn't take Maigret long to establish that Ricain is part of a set of would-be artists who frequent a restaurant owned by a former film stuntman named Bob Mandille. It occurs to Maigret that he could best establish what actually happened to Sophie by getting to know the group of people who form part of Ricain's circle. Accordingly, he and Lapointe spend an evening at the restaurant, the Vieux Pressoir, during which Maigret has a long talk with Carus and his wife, Nora – both of whom have little good to say about Sophie – and Maki, the sculptor. He admits to having slept with Sophie, whom he describes as a tramp – an impression Maigret had already gained from his conversation with Carus and his wife.

It is typical of a Maigret novel that, following this contact with Ricain's associates, and although it is not possible for the reader to say precisely how, Maigret has formed a theory – one that he is almost able to prove as he makes further investigations. It seems that the majority opinion among Ricain's acquaintances is that Sophie was a slut who had brought Ricain nothing but trouble.

That she would not be missed is beyond question, but would any of them feel strongly enough to kill her? And, since it could hardly be mere dislike, what was the motive? As frequently is the case in Maigret's investigations, the truth, when it emerges, is almost banal and we find ourselves saying, “Of course, that had to be the case. We should have known it.”