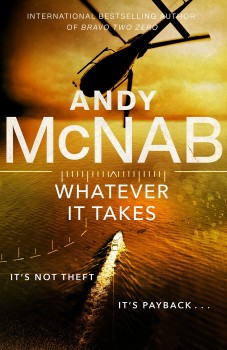 When James Mercer’s latest heist doesn’t go according to plan, he’s presented with an ultimatum – pull off a seemingly impossible job or suffer the consequences.

Former soldier James Mercer bears a very understandable grudge against the financial institutions that brought ruin on his family. He wants payback and has developed an original way of getting his own back in a rather more direct way than writing irate letters to newspapers or trying to get his point over on TV. Mercer has turned to theft, but it’s on a grand scale, and involves serious money.

He’s out to rob the people who sit at the very top of the financial pyramid, the one per cent who own the vast bulk of the world’s wealth. But these are not the kind of people to mess with, as Mercer learns to his cost when one of his break-ins goes disastrously wrong.

Whatever It Takes is a departure from Andy McNab’s normal fare and is his first standalone novel. He brings his impeccable knowledge of military hardwear and high-tech equipment to bear and his usual brisk style pushes the story along at a very respectable pace as Mercer is forced to work for the man he’d set out to rob, who has something he wants to get his hands on, and he’s decided that Mercer is the man with the skills to get him what he wants.

Mercer has to assemble a team who can help him play a get out of jail free card by breaking into a seemingly impregnable mansion. He calls on former army colleagues, dangling the carrot of a very large cash reward for their help. With them comes Mercer’s sister, Charlotte, who’s going to handle the financial side of things.

As ever, McNab serves up plenty of thrills and spills with bags of tension throughout, but there was something about the plot that just failed to grab me by the throat the way his books normally do. The background plot started to move steadily in the direction of something that would sit well alongside the likes of the Da Vinci Code and assorted other conspiracy thrillers and the central premise didn’t succeed in gripping my imagination, but this is a case where your mileage may vary.

I liked the characters, especially the inscrutable Mr Egbers, who at first seems straight off the Bond villain central casting couch, but as the book progresses he comes over in a very different light, and ticks my favourite box when antagonists have to work together to ensure their survival.

For me this doesn’t quite clear McNab’s usually high bar, but despite that, Whatever It Takes is still a damn good thriller, with likeable characters, well-thought through scenarios that never totally shattered my suspension of disbelief and for that I’ll happily forgive a premise that didn’t quite live up to its initial promise.