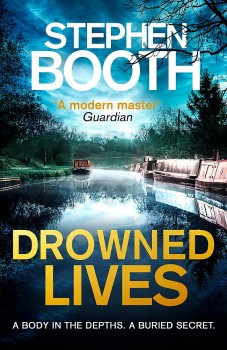 When Chris Buckley is approached by an old man who wants his help untangling an old family rift, he’s not keen, and it shows. But when the man is killed in a hit and run accident, things take a more sinister turn.

I was surprised to see Derbyshire author Stephen Booth leaving coppers Ben Cooper and Diane Fry to fend for themselves for a while as he turns his attention to the canals of Lichfield, rather than the upland hills and dales which are his normal stamping ground.

Chris Buckley, his new main character, works as a journalist after losing his job with the local council and lives in the house he inherited from his parents. Chris isn’t the most financially prudent person, and when a friend enlists his help in financing a start-up dot.com company, he puts his money where his friend’s mouth is, despite it being blindingly obvious to anyone with even two brain cells to rub together that his friend is only leading them deeper and deeper into debt with little or no chance of reward.

With this as a backdrop, Chris is approached by an old man he’s never met before, who wants to enlist his help in settling an old rift stretching back decades. He wants Chris to employ his investigative skills to research long-buried family secrets. Chris isn’t keen to get involved and makes that plain. When he fails to turn up for a scheduled meeting, Samuel Longden, the old man, walks off in disappointment, unaware that Chris is watching him from a nearby pub. Moments later, the old man is killed in a hit and run incident and unsurprisingly, the police want to get to the bottom of his connection to Chris.

Matters take a stranger turn when Chris learns that Samuel Longden has left him the sum of £50,000 in his will on the proviso that Chris takes on and completes work on a book that Samuel has been researching for years. Chris needs the money, but it’s still not a job he’s keen to take on. His neighbour is more interested in Samuel’s notes than Chris is and makes a start on a transcript of the old notes. Things take a sinister turn when Chris’ house is burgled and his neighbour is attacked, which seems to pique his interest even more than the tantalising prospect of some badly needed money.

To be quite honest, whilst I enjoyed the atmospheric description of the waterways around Lichfield, Drowned Lives failed to grip me. Centuries-old family feuds might be a staple of Sunday night television, but they don’t hold much interest for me. The mystery of a death – or possible murder – committed on the canals nearly 200 years previously never really fired my imagination, and I quickly became bogged down in the minutiae of the feud and plethora of family details. A committed genealogist might fare better than I did. I simply felt adrift, with the plot progressing as slowly as the unmoving waters of the canals.  I rapidly lost any sympathy with the financially feckless main character who seemed utterly disengaged from what was happening to his money, leaving me wanting to loudly scream at him to wake up and start taking an interest.

Unsympathetic protagonists have their place, but they need more character than Chris Buckley seems to possess to generate and maintain interest, and a split storyline runs the risk of not investing the reader in either, which is the fate I suffered.