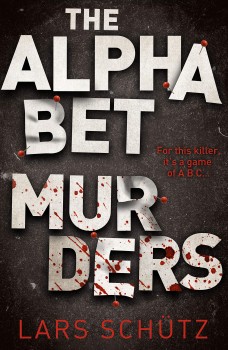 When the body of a man is found brutally murdered in a wildlife part and tattooed with a letter A, criminal profilers Jan Grall and Rabea Wyler are thrown into a deadly game of cat and mouse.

Set in the unusual location of Westerwald, in rural Germany, this first novel throws everything at the serial killer genre …

Profilers Jan Grall and Rabea Wyler, or behavioural analysts as they prefer to be called, are asked to help investigate the discovery of a mangled and branded body in the bison enclosure of a wildlife park near to Jan's childhood home. With very short chapters and at breakneck speed we are introduced to a series of stereotypical characters including our two protagonists, both with guilty secrets, complicated back stories and a hint of sublimated romance between them; an angry and resentful old-school local police chief; an exotic female boss who also happens to be Jan's ex-lover; a nosey journalist with a hidden agenda and a rookie police officer destined to be killed in the line of duty. Then throw into the mix some marginally insane family members; a teenage druggie side-kick; a beautiful but enigmatic stranger and you will get the picture.

The moderately gory deaths come at a gallop in the well-loved ABC tradition, which is some feat considering all the action takes place over just six days. So much goes on in this book that it feels as if the author loses control over some of the threads. The rather fanciful motivation for all of this slaughter is linked to the literary world with the killer leaving heavyweight literary quotes from the likes of George Orwell at the scenes of crime. Main character Jan is credited with possessing hypersensitivity but what this actually is and means is never fully developed.

I liked the setting for the murders, but the sense of place could have been more imaginatively drawn. From an atlas I discovered that Westerwald is an area near the border between Germany and the Czech Republic.  One of the characters describes Westerwald as 'hicksville' and this description is about as good as it gets.

On the plus side this is a proper whodunit and the reveal was not obvious and kept me guessing right until the end. I also liked the dictionary definitions of the letters of the alphabet, from the aptly-named Grimms' Dictionary, as the killer relentlessly worked through them.

I am presuming Lars Schultz has set his characters up for a second outing. If, as I suspect, he has got a lot of the obvious crime conventions off his chest – including the punctuating italic passages so well used by the Scandi thriller writers – then he may produce a more measured follow-up. And next time can we have a map please?