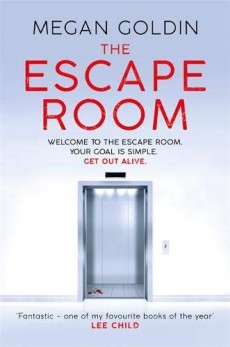 Four Wall Street high-flyers find themselves trapped together in an elevator escape room with one instruction – to get out alive.

Three high-flyers from the same prestigious finance company on Wall Street are texted one Friday afternoon with instructions to attend a late-night meeting at a remote building they’ve never been to. The text from their boss says it’s mandatory and, worried that if they don’t attend, their jobs might be at stake, they each put their personal plans on hold to turn up.

Their department has been losing money recently, failing on bids for important accounts, messing up figures and making mistakes that are costing the company dearly. Their boss, Vincent, blames some of their failures on the loss of the best data analyst in the company, a woman who took her own life some years earlier.

As the three wait in the empty lobby of the out-of-the-way building, Vincent turns up and informs them they’re all to participate in an escape room challenge. There’s a promotion going at the firm, and they figure that this is the company testing them to see who might be suitable for the position. They board an elevator which they assume will take them up to the floor where the games are run. It does indeed take them up towards the 70th floor, but before reaching it, the car stops, the doors remain closed, and the small TV screen above the control panel flashes up a message for them:

Welcome to the escape room. Your goal is simple. Get out alive.

Thus starts the least puzzling yet most most baffling escape room game they’ve ever played and I’ve ever read about, watched, or participated in yet. Yet, despite the inane clues and their continuing lack of progress towards making an exit, not one of these highly intelligent, upwardly motivated people work that it’s not a game, it’s a trap.

Between updates on their ever-worsening predicament, the author tells us the story of Sara Hall, a graduate who worked at the same firm as our unfortunate four years before. We’re taken back to her chance meeting with Vincent in an elevator following a failed interview at another company in the same building. This wildly unlikely scenario is what the whole book is based on, and while it’s entertaining enough for an afternoon’s read in the sun, its implausible start never leads to anything more believable. If anything, the narrative gets more and more dubious. In particular the final scene is straight from a 1980s Hollywood blockbuster, and maybe that’s what the writer is aiming for.

The characters are annoyingly one-dimensional and not a single one of them is likeable in any way, particularly not Sara Hall, with whom the reader’s sympathies are obviously supposed to sit. If there’s supposed to be humour in the violent climatic ending, it was lost on me, and the justice which was supposed to be served here reads more like personal revenge.