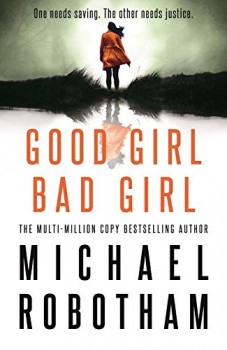 Cyrus Haven’s already troubled mind is spread thin, investigating a horrific murder case and helping a girl who needs saving from herself.

Nottingham police find an unidentified, abandoned and starving girl hiding in a secret room. Somehow, she is attached to a shocking crime that has gone down just feet from her hidey-hole. She could be anywhere between 12 and 15, but her DNA draws up no matches, and no one is looking for her.
Six years later, the anonymous girl, now known as Evie Cormac, is still in a secure children’s home and demanding her release as an adult. But her claimed ability, to know when someone is lying, makes her volatile and a dangerous woman-child, as forensic psychologist, Cyrus Haven, is about to find out when he is called in to give his professional opinion on her future.

This is not troubled Cyrus’s only case; he is also helping investigate the shocking murder of high-school champion skater, Jodie Sheehan. At first, the police believe she is the innocent girl-next-door who should have never finished her life as a rape and murder victim. But Cyrus finds Jodie’s secret life festering just under the surface – a life that Evie knows something about, and one that could cut more lives short.
Good Girl, Bad Girl is the first book in the Cyrus Haven series. It’s part police procedural and part psychological thriller, and is a been-there familiar but completely unique story, reminding the reader that imagination and quality writing trumps gore or shock factor every time.

I would so love to spend some time inside Michael Robotham’s head. He has successfully enthralled me with vibrant, flawed and convincing characters that drive this compelling, complex and multi-layered plot. It is rare that I invest so much in paper-people that I have no desire to pick up another book after I have finished the one that they star in. But the author left me truly wanting more of Evie and Cyrus and temporarily disinterested in the pile of books on the table vying for my attention.
Perhaps it is the quality of his writing. Perhaps it is the intriguing, dark and disquieting suspenseful mystery, wrapped up in this slow-burn, police-style procedural that immediately drew me in. Either way, I forgave the occasional pokes at my suspension of disbelief and delighted in the journey.

The dynamics between the two main characters, Cyrus and Evie, compel and fascinate. Sharp observation from the author converts into excellent description, carefully scattered and unobtrusive backstory, pithy dialogue and realistic introspection. These aspects combine seamlessly with plenty of action to keep the pacing even and ensure the reader’s continued investment until the last page – a rarity in this day of predictable plots and hackneyed characters.
The murder mystery often feels overshadowed by Evie and Cyrus’s stories, and one sees little proof of Evie’s ability to identify lies and liars. But I imagine the latter will trickle into future books in this series. The milieu, somewhat secondary, could have been any large town, though the writing convinced me that this is set in Nottingham, and absolutely up to date.
Michael Robotham is an expert storyteller who has woven several unresolved subplots into this story. I should hate him for dangling me over a handful of small cliffs. In reality, I am hooked!