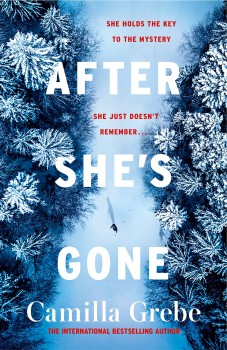 Psychological profiler Hanne and her partner investigator Peter arrive in an isolated town in dense forests to investigate a cold case. She tries to keep her dementia secret, writing everything in a diary. Within days the couple vanishes, adding to the tensions between local inhabitants, police and the refugees relocated to the area.

Hanne Lagerlind-Schön, a brilliant psychological profiler, is a battling personal powerful demon of dementia which is taking hold of her life. She starts to keep a diary to note down every detail of what’s happening and all emotions that she’s experiencing so as not to forget and to avoid anyone suspecting that she loses her memory.
She also reluctantly returns from an extended blissful holiday in Greenland with her partner investigator Peter Lindgren. They are the two main experts from Stockholm called to assist with the investigation into a cold case in the small, deprived post-industrial town of Ormberg, surrounded by dense, impenetrable woods. Ten years earlier, the remains of a five-year-old girl were discovered in a cairn nearby. With no records of the unknown victim the couple begin digging into the past of the area’s inhabitants and their contacts, but their inquiries suddenly stop as they both vanish.
Then one night, Hanne is spotted wandering on a forest road close to teenager Jake’s home. She is disoriented, bloodied and suffering from hypothermia, unable to remember anything. Jake, wearing a sparkly sequined dress at the time, is too embarrassed to call the police but luckily another passer-by does. However, he picks up Hanne’s diary.
As winter spreads its freezing tentacles more bad news comes. Peter is still missing, and soon a body of a shot woman is found, and accusations from the local people, blaming refugees relocated to the area by the authorities, intensify. The tensions grow as the investigation changes its course.
Young policewoman Malin, also sent to work on the case, is both excited and terrified of joining the team as she struggles being back in Ormberg. She could not wait to escape her hometown, especially after the death of her boyfriend and the feeling of being trapped in a place with no future but full of broken promises. Yet she can contribute her local knowledge, as well as her personal experience of finding the remains of the girl years ago. Hence the circle of connections and events closes.
After She’s Gone, in Elizabeth Clark Wessel’s excellent translation, explores the feelings of belonging and being displaced, searching for one’s roots and trying to establish an identity. It bravely takes on the difficult subjects that can resonate with many readers: the reaction to dementia, possible transgender issue and the contrast between expected behaviour and emotions that people are hiding, scared of becoming exposed and rejected.
Camilla Grebe is an incredible storyteller, weaving seemingly unconnected strands into a complex, gripping and painfully bleak tale, atmospheric and tense, filling it with nearly palpable cold and darkness. The slow-going narration moves in parallel with the investigation’s apparent lack of progress, Jake reading the diary and the snippets of memories from Hanne. The pace picks up gradually until the distressing rush to the shocking finale which forces everyone to face their preconceptions.
The story moves between the perspectives of Malin, Jake and Hanne, and sweeps everything on its way, bringing some kind of resolution to their lives. There is no happy ending but some understanding of basic human emotions is on the horizon.