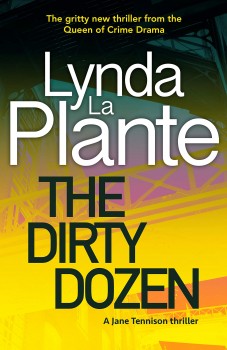 Detective Sergeant Jane Tennison is posted to the Sweeney, the Flying Squad, rocked by corruption allegations and notoriously misogynistic. She must not only prove herself to her male colleagues, but also tackle some of London’s most vicious armed robbers.

The fifth book in the series following the early years DCI Jane Tennison, the tough and capable protagonist of the brilliant ‘Prime Suspect’ TV series is yet another assured bestseller for the Queen of modern crime writing.

Lynda La Plante has redefined the ‘procedural’ with these realistic and clever slices of contemporary police history, which highlight the successes – and failures – of Britain’s largest force, the Metropolitan Police. While the sheer hard work and when necessary outright bravery of London’s finest are paid their full due, she has never shied away from the appalling corruption, gender discrimination and racial bias so common in the period in which her stories are set.

In April 1980 Jane, now a DS, is the first female detective to be posted to the Met’s renowned, but now sadly compromised Flying Squad, at one of their area bases in the East End. She believes her transfer is on merit, but is surprised to discover she is the subject of an experiment, designed from the off to be no more than a sop to the emerging women’s lib movement. She’s posted to the small regional team which likes to dub itself the ‘Dirty Dozen’ after the 1967 American war film starring Lee Marvin who leads a team of criminals on a dangerous behind the lines mission.

The macho, misogynistic men on the squad and their tough-guy, old-fashioned leader don’t think a woman is up to the dangers they face. The Sweeney was formed to deal specifically with armed robberies, either from banks, businesses, or cash in transit, and their favoured method is using information from ‘snouts’ to set up on-the-street ambushes, often involving firearms, to catch the criminals in the act.

On her first day with her new unit, where no one expects her, Jane is involved in a robbery gone wrong which forms the basis for the rest of the story.

What makes this series so good is La Plante’s superb research. As a crime reporter at the time, occasionally working with the Sweeney and other of Scotland Yard’s specialist squads, I can vouch for the accuracy of procedure, attitudes and dialogue of her characters – even down to the then alarmingly growing tendency to violence of street robbers to carry and be prepared to use firearms rather than the hitherto favoured pick-axe handle or iron bar!

The robberies themselves stick as close to facts as is possible – the 1974 payroll snatch at the LEB in Ilford and a later raid on Tesco in Leytonstone spring immediately to mind – but all street blags tended to follow a predictable pattern.

After dating a regional crime squad WDS, I can also verify her portrayal of gender attitudes. The woman was a fine, possibly brilliant, detective, endlessly effective and occasionally inspired. She was also courageous – and, I hate to say it, a better marksman with a handgun than an ex-professional soldier! Promotion? Armed operations? Forget it! Their outdated attitude cost a backward county force someone who could well have gone on to the most senior ranks.

We all know Jane eventually overcomes those problems. But her start with the Sweeney is not promising. Arriving at the scene of the botched robbery, she is immediately sidelined to dealing with witnesses. When she discovers what could be useful information, she is told it’s not vital and her suggested line of inquiry immediately shut down.

Not only do the men of the squad question her abilities, try to make her look incompetent and sideline her to unimportant tasks, she is also targeted by the only other woman in the office, a secretary seeking to protect her own illicit relationship with the squad’s married DI! But when Jane is relegated to assisting the Scene of Crime Officer, he is interested only in her investigative skills rather than her gender and the pair find clues overlooked by other detectives.

Despite the obstacles, her strength of character, self-confidence, determination and tenacity have her following several leads on her own and producing reliable information about another much larger robbery being planned by a ‘team’ known for its willingness to use violence.

The plot is well developed and the characters realistic for the time. Modern readers will find it strange to see an investigation proceed without the use of technology such as computers and mobile phones, but details such as that show just how difficult The Job was. The story is heavy on procedure, with information often repeated which at times slows the pace, but again gives an accurate and fascinating portrait of the difficulties detectives faced.

The denouement may be more than a little over-dramatic, but hey, this is ‘faction’ and a certain amount of licence is allowed. It’s another absolute winner to add to La Plante’s already massive list.