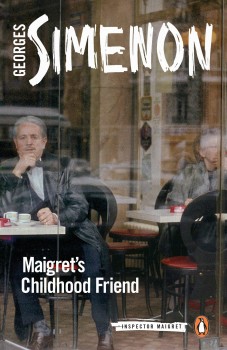 An old schoolmate calls on Maigret to inform him of a murder, and expects some allowance to be made for old acquaintance despite the fact that he is clearly the prime suspect.

The Penguin re-issue of the Maigret stories has now reached 1968 – the mature detective has by now consumed too many of Madame Maigret’s dinners to be active on the street himself, but he has an office full of subordinates at his command.

It is nearing the end of a warm June day when Maigret receives an unexpected visitor: Leon Florentin, who he has barely seen since the time many years ago when they were both at school together. Florentin was the class clown, the son of a well-to-do patissier, but has clearly now come down in the world, and in fact has become a kept man.

Florentin explains that his visit is to inform police about the death of the woman, Josee Papet. He takes Maigret to her apartment where they find her dead from a bullet wound, and Maigret sets the normal processes in train. Florentin frankly confesses that he is Josee’s boyfriend, but that he shares her favours with four others, three of whom are respectable men unaware of their rivals.

The four are identified with little problem. Although none have convincing alibis, Maigret can see no clear motive for any to have committed murder. The only one who appears to be aware that he is not the sole recipient of Josee’s affection is in the way of becoming a new boyfriend himself. Maigret questions the concierge who claims that Josee had no visitors around the time of the death, which makes Florentin, who confesses to hiding in a cupboard at the time, the prime suspect.

Maigret is aware that Florentin is a disreputable character who has served time for fraud, and he believes that the man is a liar. However, he doubts whether the man is a killer and is reluctant to arrest him, while he is concerned that others may ascribe this to his childhood relationship. Maigret sets about investigating the possible suspects in the usual way and does some thinking before he finds the answer to the puzzle he has been set.

Up to the final pages Maigret is out of sorts; he finds the claim on old acquaintance disorientating, especially when his memories of Florentin are not particularly ones of affection. His assistant Janvier, however, soon spots the change of mood in his boss which prefigures success: “In the course of an enquiry Maigret soaked everything up like a sponge ... the slightest clues which he recorded unconsciously. The more he grumbled the heavier he got with everything that he had stored up ...”

This is of course the modus operandi of the famous detective, whose methods Simenon uses so well to convey both life in Paris and the nature of Maigret himself, one of the great characters of crime fiction.