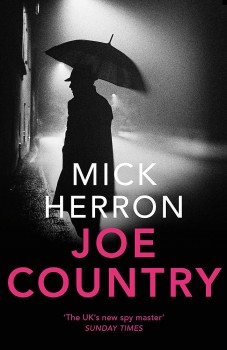 The 'Slow Horses' are going through their daily Slough House routine when they suddenly have to obey a call to arms. Louisa Guy is approached by the former wife of Min Harper, now dead, and informed that Min's son, Lucas, has gone missing. Since Louisa had had what was for her a romantic affair with Min, she decides she has to act.

This is the sixth novel in what has become known as the Jackson Lamb series. He heads a group of ex-MI5 personnel who, for various reasons, are regarded as failures. Instead of being accommodated at the main headquarters ('the Park'), they have been banished to a broken-down, decrepit building in Finsbury known as Slough House. The name of the building has given rise to a pun whereby its inhabitants are known as 'Slow Horses' – the name of the first novel in the series.

There is no doubt that these are among the best spy thrillers written in recent years. They have won prizes, been short-listed for more and Mick Herron has on more than one occasion been compared with John le Carre – a tribute to the quality of his work. It may, therefore, come as a surprise to his many admirers to say that this novel is somewhat disappointing. There are essentially two reasons for this, the first concerned with the relationship between the 'Slow Horses' and Jackson Lamb and the second with the plot, specifically with the second half of the novel.

It is never made entirely clear why Lamb was chosen to lead this disgraced bunch but in the initial novels there was a feeling that he had at least some concern for their welfare and was essentially supportive. In this one, however, his attitude has changed and can be summed up in a word – contempt. He seems scarcely capable of speaking to them in anything approaching a civilised manner, even when they are accomplishing tasks at which he has expected them to fail.

There is no such thing as a normal conversation between Lamb and his underlings.  Although there is, in the situation in which he finds himself, some excuse for treating them with a certain ironic dismissiveness, he goes much further than that. Almost every word that comes out of his mouth is bitterly sarcastic. It seems almost infectious because his staff speak to each other in the same way, even though they show a mutual loyalty. A sarcastic comment is answered with a sarcastic comment and the conversations become tedious. Even in difficult situations they seem incapable of talking in a constructive way. Furthermore, nobody takes exception to this constant verbal sparring. It is just the way things are in Slough House.

Nor is it only in conversations between characters that this trait is found. The author's narrative passages are full of attempts at irony and one longs for a bit of straightforward prose to enable the story to move forward.

The plot involves a search by a group of the Slow Horses for the son of Min Harper, once one of their number and now dead.  At first it is unclear why he has suddenly left home but little by little we begin to appreciate that he is in danger. They learn that he has gone to Pembrokeshire on the Welsh coast and follow him there. It soon becomes obvious that they are not the only people looking for him and what was just a feeling that he might be in danger now becomes a certainty.

Unfortunately, the remainder of the novel, nearly all of which takes place in Wales, seems to be mainly concerned with tramping round the countryside. The searchers give the impression of being lost – a feeling the reader is likely to share. There are dramatic incidents as the two opposing groups come into conflict but it has to be said that they seem rather forced and unconvincing. It is as if the author, aware that the search had to take some time, feels the necessity to spice up the narrative every now and again.

The novel concludes with a discussion between two high-ranking members of 'the Park' concerning the nature of secret intelligence work and its place in a democracy. Such a question is entirely reasonable but a little inappropriate in a spy thriller.