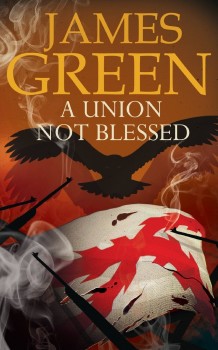 A Union Not Blessed

Boston lawyer Jean Marie McLeod, worried about his marriage and his young wife, seeks advice from a friend. A chance meeting drags him back into the world of espionage to foil a plot which could change the whole future of America.

The second of James Green’s five novels outlining the history of American intelligence services through major events in US history from its formation as the Contingent Fund of Foreign Intercourse in 1790 to its emergence as the CIA in 1947 deals with events most Americans would prefer to forget.

It is set in 1805, two years after Thomas Jefferson, America’s third president, pushed through, largely against the wishes of Congress, the Louisiana Purchase, buying more than 800,000 square miles of land between the Mississippi and the Rockies, that had once been part of the Spanish empire, but ceded to Napoleon after his conquest of Spain. The deal covered all or part of what is now 15 US states and two Canadian provinces and gave America the chance to expand west.

But all is not well in the fledgling state. Former vice-president Aaron Burr, ditched by Jefferson, is plotting treason – a daring plan to seize control of the new territories, effectively cutting off the north and making him the most powerful man in America. He has enlisted the aid of the British, who have their own plan to use Burr to regain control of the colony they so recently lost.

Both nations also have clandestine irons in the brushfires beginning to burn in the Spanish holdings in South America, where liberation movements led by men like Bolivar, O’Higgins and the flamboyant Venezuelan, Sebastian Francisco de Miranda Rodriguez are all trying to topple colonial rule.

Scottish-French Boston lawyer Jean-Marie McLeod has already has one brush with his country’s espionage service. That put him in peril from the British and the French – but brought him a beautiful young wife. Their failure to have children is preying on both their minds and their marriage is rocky. In a bid to reassure himself of his own virility, he decides to visit an old army friend, a doctor, in New York. But the city has been hit by the yellow fever and McLeod is at risk.

A chance meeting with Miranda, who he came across in his earlier adventures, leads him back into the world of lies, double dealing and death which is both internal and international diplomacy, where death is punishment for a wrong decision.

McLeod is simple, stubborn, sometimes naive to the point of stupidity, but above all a patriot. Against his will, he is sucked into this vortex until he reaches a point where he knows too much.

A fascinating plot sticks close to known facts – Burr eventually did face trial, although he knew far too much about those in power to ever be convicted. Green triumphs with his ability to blend the facts with his story to make riveting reading and brilliantly captures the style and speech of the period in what must be one of the most mannered and gently spoken espionage thrillers ever. But he does not spare the organisation which will become the CIA, which even in its early years, exhibited a disturbing tendency towards collateral damage.

This is an outstanding and enlightening follow up to a great debut. I look forward to the next in the series.