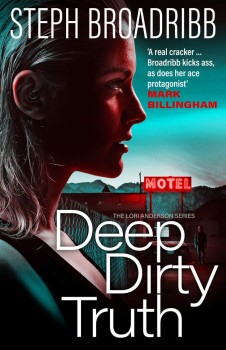 When bounty hunter Lori Anderson is offered a deal by the boss of the Miami Mob, she has little choice but to agree, as to turn it down would put a price on her family’s heads, as well as her own. She has to snatch someone from FBI custody. No pressure, then.

Bounty hunter Lori Anderson is in trouble. A lot of trouble. There’s a price on her head from the Miami Mob and ‘Old Man’ Bonchese isn’t likely to lift that before he gets his pound of flesh for the death of a man he regarded as a son – Lori’s abusive husband. On top of this, JT, the man she loves and who taught her all she knows of her craft, is recovering from a vicious attack sustained when he was wrongly locked up in prison. And then there’s the constant worry that her young daughters cancer might come back, and Lori has already been ruled out as a match for a bone marrow transplant.

So when Lori is offered a deal by the Old Man – do a job for him and have what he sees as her debt to him cancelled – she goes along with it. She’ll do what’s needed to keep her newly forged family safe, as JT is not just her lover, he’s also Dakota’s father and the most likely person to be the right transplant match for their daughter.

The job she’s given is to spring a man called Carton North from the FBI’s custody. He’s a money man for the Mob, and the Old Man wants him back. The odds are stacked against Lori, who’s been told she has to work this one on her own. If she succeeds, the price on her head will be lifted. If she fails, she’ll almost certainly be dead.

Lori Anderson operates best when her back is against the wall, and that’s the case in Deep Dirty Truth, the third in the series about the ballsy bounty hunter who can hold her own in a tough trade. Lori prefers to stick to a Taser to help her bring bail jumpers back to face justice, so it’s a measure of how serious this latest job is that she breaks her own unwritten rule and carries a gun. She needs it, too, and isn’t afraid to use it.

Carlton North isn’t quite what she’s expecting, as he turns out to be pretty handy with a gun as well, and this sets up a classic scenario of antagonists being forced to work together, which is my all-time favourite fiction trope. Steph Broadribb is adept in her handling of characters. On both sides of the law-making/breaking divide there are no stock villains, just a lot of nuanced shades of grey.

Naturally, North isn’t all he seems and as the stakes get higher and Lori is injured in a fire-fight, their reluctant partnership turns into the highlight of the book. There’s also an appearance by dodgy FBI agent, Alex Monroe, who ramps up the tension even further, as it’s never easy to know whether he’ll be a help or a dangerous hindrance but, as ever, he has his own take on things.

The final action scenes ticked every box for me, with a realistic scenario where the odds are heavily stacked against Lori and her allies and there is no certainty that things will go her way. Broadribb serves up a classy action thriller with a main character who is well worth following. Lori reminds me of Zoe Sharp’s Charlie Fox and I’d love to see a story where those two have to work together!