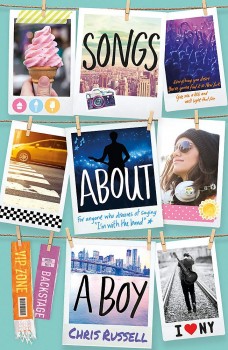 Songs About a Boy

World famous boyband Fire&Lights are on the brink of a messy break-up as tensions between lead singer and songwriter Gabriel West and band member Olly Samson boil over. Charlie Bloom, the band’s young photographer, blames herself and just wants to wind back the clock to happier times.

Songs About Us, the second of Chris Russell’s brilliant depiction of life in and around boyband sensation Fire&Lights, ends with a climactic fall-out on stage between lead singer and songwriter Gabriel West and his fellow band member Olly Samson.

In the wake of this, Charlie Bloom, who’s spent the past year working with the band capturing revealing moments with their blessing, blames herself and wishes she’d never started to delve into the mystery surrounding her mother’s death, which intimately links Charlie with Gabriel West. Both their parents were part of a band called Little Boy Blue, but Charlie’s father has never confided in her or explained the circumstances surrounding her mother Katherine’s death.

From a suicide note left by Gabriel’s father, Harry West, it seems he felt responsible for the accident that killed Katherine, but when Charlie’s father does decide to open up to her, she’s left feeling frustrated that she’s no wiser about what went on than she was before. There are still secrets that she hasn’t got to the bottom of and amidst the messy break-up of the band she cares so much about, Charlie is determined to continue her search for the truth.

When an opportunity arises for Charlie and her friend Melissa to go on tour with Fire&Lights to the States, she jumps at the chance, hoping that takes her closer to finding out the truth. But in the process, she needs to stop the web of lies she’s told her father from unravelling as he has no idea she’s become close to the band and their moody bad boy lead singer.

Chris Russell paints a stunningly convincing picture of the febrile atmosphere that surrounds every teen music phenomenon. Fans jostle to get close to their idols, fierce rivalries flare up, the press circle like sharks and parents look on feeling vaguely bemused. The tensions within the band have led to a seemingly irrevocable split as Olly Samson looks set to launch his solo career with a debut single that is destined to go head to head with Fire&Lights’ own US debut.

The band has been joined by Jake Woodrow, who was dropped from their original line-up in favour of Gabriel West. The press are all over the band like a rash, determined to hype up both the internal tension and the external rivalry. There’s even a rumour to contend with that Yuki and Aiden, the other two band members, are seeing each other as the hashtag Yuken gains traction on the internet.

For anyone who’s been into fandom, and its more specialised arm, bandom, Songs About Us reads like a candid documentary into the lives of Fire&Lights and those close to them. The high and lows are skilfully depicted, and the X Factor atmosphere comes over brilliantly. One thing that I really like is the treatment of manager Barry King. It would have been all to easy to portray him as an exploitative manipulator, but Russell neatly avoids stereotyping and instead, King comes over as a genuinely nice guy who really cares about the band and also about Charlie.

In Russell’s capable hands, the trilogy entirely fulfils its early promise and reaches a shattering climax with me by no means certain that there would be a happy ending for anyone as revelations pile messily on top of each other, leaving me gasping aloud in places and mentally begging Russell to give everyone a break.

This is writing for teens at its best. I’m sorry Charlie Bloom’s story had to end but I’m simultaneously planning a duvet day sometime this winter so I can read all three again back to back, loudly yelling and stamping my feet for an encore at the end!